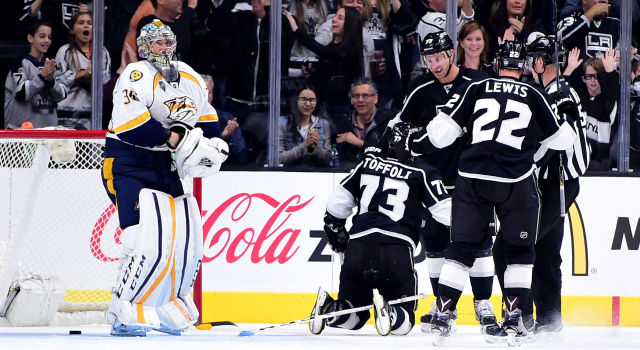 On whether the comeback showed resilience:
We’re trying to hang in there against a really good hockey club. We were able to do that, score a big goal.

On any commonality during the winning streak:
Not really. We got it from different places tonight. The killed penalty in the third, I would say, is the difference in the game. Coming out of the penalty box and scoring.

On momentum shifts and adjustments during the game:
What were the adjustments that you’re talking about? [Reporter: Well, it seemed like the flow in the first period you were pretty dominant, and then things, they kind of picked up a little bit.] They’re a really good hockey club. I don’t think one team is going to dominate the other. I mean, it’s no score after the first period, and what is it after the second? I wouldn’t say there was a whole lot of momentum one way or the other. I thought it was a really close game played by both teams.

On whether he likes three-on-three overtime:
I have already said it several times that I do like it because whatever you can do to not get to a shootout is a good idea. [Reporter: Are you learning how to strategize more as you go?] Yeah, we’re geniuses at it because we’re 2-0, so I know everything about it. Got it figured out.

On Jonathan Quick:
It’s two good goalies tonight – Rinne and Quick – and I think those position players like that challenge each other. It’s a team that Jonathan, if you look at it, has not had a lot of success against, so it’s good to see him get the win.

On Christian Ehrhoff:
I think he’s fine, but I’m not into answering that or talking about it.