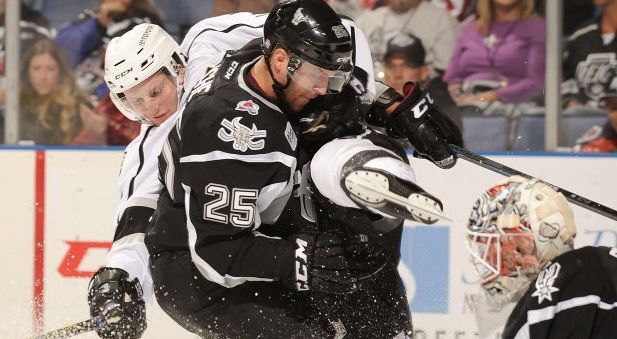 Reign game breakdown
The Reign (5-0-1-0) took their first loss of the season in a 3-2 overtime defeat to the visiting San Antonio Rampage (4-0-1-0) when Ben Street fooled Reign goalie Peter Budaj on a backhand move with 47 seconds left in the extra frame. Ontario had battled back to tie the game late in the third on a Justin Auger tally (more below on his fantastic goal).

Best quote
Head coach Mike Stothers, on the team battling back after falling behind 2-1 in the third:
“You can very easily get discouraged and we don’t. We’re trying to instill the same type of demeanor that we had last year. Again, we don’t get too pumped up with wins, we don’t get too pumped up when we score and we don’t get discouraged when we get scored upon. Stay even-keeled, stay focused and you know what, there was still a lot of hockey to be played, there was still 10 minutes I believe, of hockey. We’re confident in our abilities to battle and that’s part of it. When things are going good it’s easy, but you know what, when you’ve got some adversity it’s how you dig in and I was real proud of our guys, I thought they did a great job.”

Three stars
–Justin Auger – You won’t see many goals like Auger’s power play tally in the third. With his back to goalie Calvin Pickard he knocked an Adrian Kempe rebound between his legs to tie the game with 3:27 left in regulation. Auger not only scored the goal, but drew the penalty that resulted in the man-advantage. All in all it helped the Reign salvage a point here.
A look at the goal:

–Calvin Pickard – There seemed to be a party around the Rampage goalie’s crease, especially in the third period where his net was off its moorings nearly too many times to count. Pickard, who stopped 35 of 37 shots, held steady in overtime, turning away three very good opportunities for the Reign’s Sean Backman (two outside chances and another in close after Backman had burned Colin Smith).
–Ben Street – The Rampage center finished with a goal and an assist, but the OT-winner came after he had just been stopped by Budaj on a breakaway. On the same shift he managed to get the puck again and didn’t miss on his second chance.
Here’s the winner:

Turning point
–Ryan Horvat’s untimely penalty (and it was also away from the play) in the third period with the Reign already playing shorthanded gave the Rampage a 5-on-3 advantage for 1:15. San Antonio used it to take a 2-1 lead on a goal by Smith off a rebound. Smith’s tally changed the pace of the game as the Reign worked to get the equalizer.
A look at Smith’s goal:

This and that off-ice
Center Kris Newbury (broken foot) was seen after the game on crutches by the team locker room. It was quite the hefty cast as well, right up to his knee. He’s out 4-6 weeks and the Reign missed his presence in the middle.

Next up
It’s a 3 p.m. Halloween puck drop as the Reign and Rampage will go after it again at CBBA.