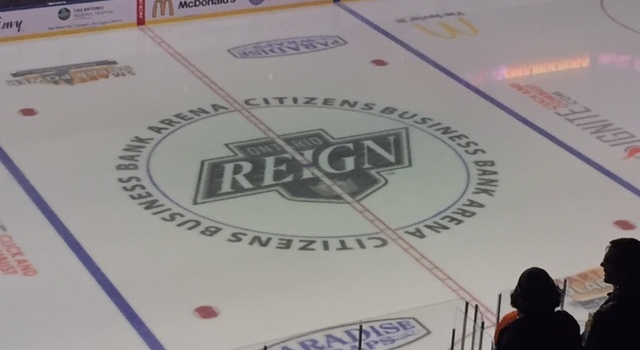 Arnold was called up from the team’s ECHL affiliate, the Manchester Monarchs. Arnold has a goal and an assist in three games. The Reign are familiar with Foxboro, Mass., native as he was on the team’s training camp roster.

Courtesy of Eliteprospects.com, here’s a look at Arnold’s career:

Miller joins the Reign from the Wichita Thunder. He has two goals through five games for them.

Here’s a look at Miller from Eliteprospects.com as well.

“They’re both good team guys,” head coach Mike Stothers said after Thursday’s practice where both players took the ice. “They’re versatile enough that they can come in, play center, play the wing, they both can kill penalties, so they have some value.”

The reinforcements were much needed. Ontario will be without center Kris Newbury (foot) for 4-6 weeks and winger Paul Bissonnette is still recovering from a lower-body injury. Joel Lowry has been cleared for contact and could be back in the lineup as early as next Thursday’s game against San Diego but won’t play this weekend, head coach Mike Stothers said.

Arnold and Miller could possibly see action this weekend as the Reign have three games in three days starting Friday, but Stothers said he told both players there were no guarantees. Ontario hosts San Antonio on Friday night at 7 p.m. and again Saturday afternoon at 3 p.m. before hitting the road for another 3 p.m. game Sunday at San Jose.

“It gets us covered,” Stothers said, adding, “you’re basically playing three games in two and a half days so we’re probably gonna need everybody.”