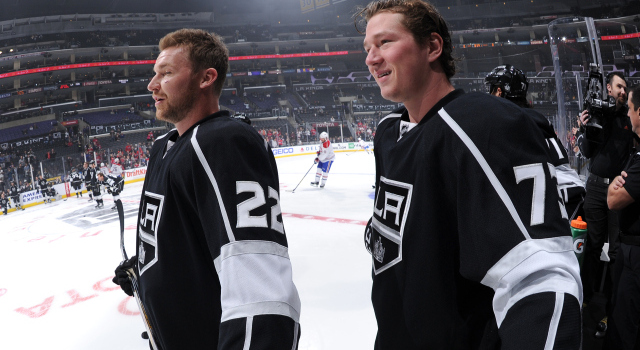 Insiders! My LAKings.com feature is now up at, well, LAKings.com. This week, I spoke with Nelson Emerson and Mike O’Connell to get an articulation of the team’s efforts to develop their players on and off the ice. I also spoke with Darryl Sutter, Trevor Lewis and Tyler Toffoli and learned that between being drafted as a teenager and vying for a spot on the Kings as a professional, there is a comprehensive process that allows each player’s natural gifts to come out.

From Developing an Identity:

It is a huge asset that the staff is populated by former players, as Darryl Sutter sees it.

“A couple of them – well, OC in particular – are guys that I played with. Muzz and Nelly are not that far removed from the game,” Sutter said. “Former players are guys that were good players, guys that took care of business when they played. That’s the most important part.”

It’s a trend around the National Hockey League that players are joining the development staffs of the teams they played for. Evgeni Nabokov joined the San Jose Sharks’ staff as a development coach and a scout prior to this season. Rich Peverley is part of the Dallas Stars’ development staff, and ditto for Sergei Gonchar and the Pittsburgh Penguins. It’s an extended list.

“It would be the very same as teacher-student,” Sutter said. “The student has to respect the teacher.”

And that comes not only through on-ice work but serving as advisors and confidants to the players they become extremely close with.

“Most of our work is based on experience and what we’ve gone through in our careers,” said O’Connell, who has been involved in professional hockey as a player, or in a coaching or managerial capacity since 1975 and served as the Boston Bruins’ general manager from 2000-06.

“I’ve been fortunate to basically do everything in this business and have a pretty good, healthy understanding of where everyone’s focus is, so now you go back to the player and try to make them understand everyone, how it all works, in a constructive way so that they can maybe better understand where the coach is coming from or circumstances that they might be in and how to deal with every roadblock or obstacle that comes in their way, because there are a lot of them for most players.”