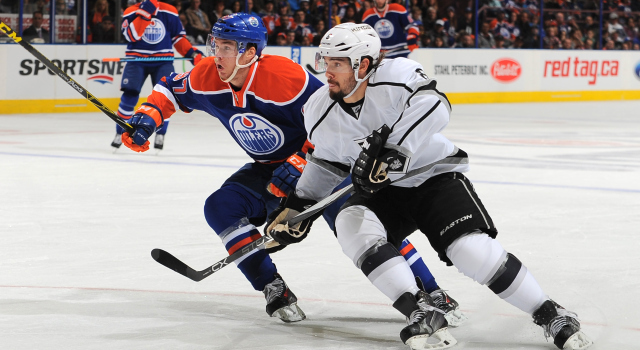 Drew Doughty, on Jonathan Quick’s save on Connor McDavid:
Obviously we didn’t want that to happen. We had a couple chances to get the puck out and obviously it didn’t happen, but we’re used to Quickie doing those types of things. Quickie’s the man. He’s one of the best goalies in the league for a reason. He makes big saves. He makes the easy saves. He does everything. We wouldn’t be the team we are without him in net.

Doughty, on the power play goal:
Well, the one unit has been scoring a lot of goals. The unit I’m on with Kopi and Muzz, we haven’t scored any goals yet. But I felt like lately we’ve been really turning it on and getting better looks and more shots. Tonight, I thought we were zipping it around and had some good looks again and kind of got a lucky bounce to make it go in, but it went in and that’s all that matters.

Doughty, on what he liked from their play in the second period:
The second period, we were just trying to get pucks up. We’re trying to chip pucks in, get in on the forecheck, have a lot of speed, get pucks to the net and then bodies to the net. We did a good job. We didn’t spend a lot of time in our own zone besides when we were on the penalty kill or something like that. We were happy with that.

Doughty, on whether Edmonton had different looks from years past:
Yeah, it’s different. Obviously, no matter what, that McDavid makes a difference on their team. He’s always a threat when he’s on the ice. And they’re just a good offensive team. They’re always dominant in the offensive zone, dominant on the rush. If you can shut that down on them, you will usually win games against them. So I thought we did a pretty good job with that.

Jonathan Quick, on whether he doubted if he made the save against Connor McDavid:
I knew I didn’t see it go in, but you never know. It’s just a quick bang-bang play. You’re hoping you get the call you want and we’re fortunate we did.

Quick, on whether it’s difficult waiting for the ruling from video review:
We’ve gone through a few video replays and stuff like that. Usually plays like that, they’re so close that’s why the ref didn’t know for sure at first. But whatever the call is, that’s the call. If it ends up going in, then you’ve got an overtime to prepare for and get ready for that.

Quick, on the win:
We played great. The power play came up with a huge, huge goal there at the end, obviously. It was a team effort. They’ve got a great team over there. They’re a lot better than they were last year and they’re fast. So it’s tough.

Quick, on his first impression of Connor McDavid:
He’s a good player, that’s for sure. There’s a reason he went No.1. It’ll be fun playing against him over the next however many years.

Quick, on Tanner Pearson scoring his first goal since breaking his leg:
Yeah, absolutely. He worked hard. He worked really hard to get back and get in shape. He’s a great player. What he did for us last year and the year before through the playoffs and everything, so it’s good to see him get one and hopefully he gets rolling here.