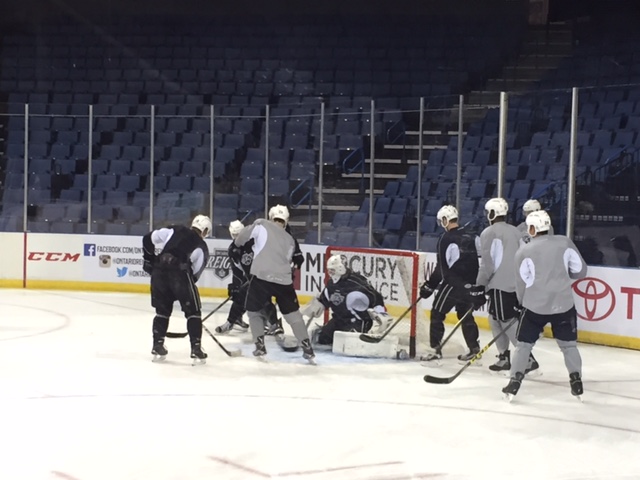 –Peter Budaj (1.23 GAA, .943 save percentage) will get his fifth straight start of the season and second in as many days after backstopping the Reign to a 5-4 win on Friday night against Bakersfield. Head coach Mike Stothers said after today’s morning skate that there’s no reason to change things with “Buds” playing well. “Everybody else is playing back-to-back so why can’t a goalie? I’ve never understood that, I don’t get it,” Stothers said.

–The Reign will look to have a better start to this one after falling behind 3-0 last night against Bakersfield only to rally for a wild 5-4 victory. “It’s not recommended that you spot the opposition three and have to claw your way back,” Stothers said. “We were fortunate that we were able to do so last night but it’s very difficult to play from behind so hopefully that was a lesson learned and we’ll come out with a better start.” Turnovers were an issue during that slow start so an attempt to simplifying the game will be in order. Defenseman Kevin Gravel: “I think we just have to be ready to go. I think we just need to simplify our game a little bit on the back end. Simple plays, get the puck moving forward, get it to our forwards’ hands. We’ve got a lot of skilled guys up front who can make plays so the quicker we can get it into their hands for them to be able to do something offensively, the better off we are.”

–No big changes are coming for the Ontario defense, which means fans will have to wait to see 6-foot-3 d-man Erik Cernak in the lineup. “There’s always the possibility of changes but there’s some guys here that have been with us all season last year,” Stothers said. “He is a young man who’s going to have a great future but you really can’t rush the process. … He’s part of the process and the development is, especially for defensemen, it takes a little bit longer. He’s still number one, learning the language, and our game, so it’s going to take some time for him. But again, he’s here and he’s available to us and we will get him in when we can.”

–San Jose was shut out at home on Friday night 3-0 against undefeated San Diego but both of their wins on the season have come on the road. They’re led by winger Micheal Haley, who has four goals in four games this season.

–Tonight’s matchup used to be the Manchester-Worcester AHL rivalry, which has now moved west to California, so these teams are familiar with one another. “We saw them an awful lot, very familiar with their coach (Roy Sommer), we played together years ago,” Stothers said. “So it’s one of those ones where you feel you know your opponent but again we have to be conscious of how we need to play.”

–The Sharks called up left wing John McCarthy this morning so the Barracuda will be without him. The 29-year-old Boston native was signed by San Jose in the offseason.