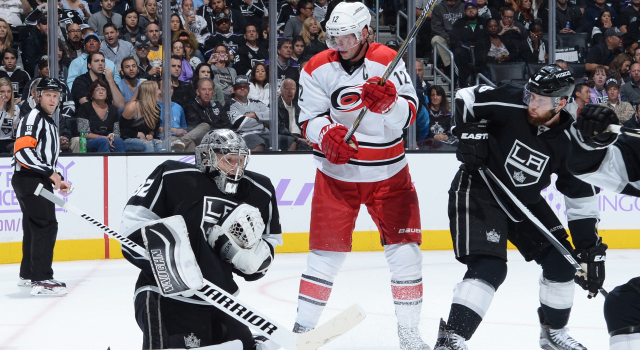 On how many goals Tyler Toffoli can score in one season:
I don’t know. Who the hell knows that?

On Drew Doughty’s reduced minutes in back-to-back games, and whether that means he’s trusting his defense more:
Well, especially in back-to-backs, you have to. You have to do it on how they’re playing. It’s not a one-goal game. You should be able to use more guys if they’re on top of their game. I think the second period, when we had a hard time, we weren’t skating, we weren’t moving the puck, and that’s an indication of how much guys are playing or not. I don’t get too excited about it. There’s not a whole lot of power play tonight, so that’s going to cut his minutes back. Muzz and Marty have been playing more on penalty kill, probably, so that’s going to cut a few seconds off in there somewhere.

On Tyler Toffoli’s emergence as an “offensive power” early in the season:
I think he was early last year, too. Last year at this time, I think Carter and Pearson and Toffoli were carrying the offense part of our team. He’s probably building on last year. I think last year, if you remember correctly, he went down with mono, and he struffled after that. He’s healthy and strong and feels good now.