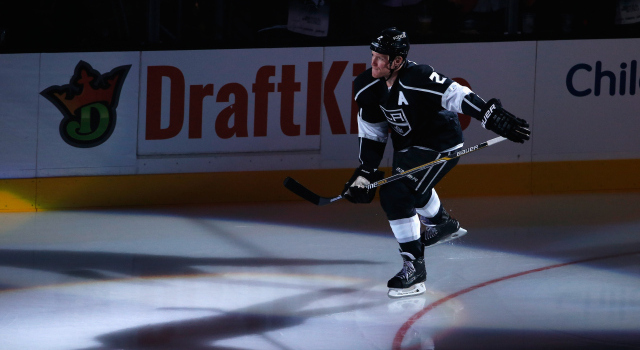 The Kings announced Friday afternoon that they have placed Matt Greene on injured reserve. This is non-news, because it’s retroactive to October 13, which means that he can come off injured reserve at any point. Greene has been beset by an upper-body injury, and as Darryl Sutter said Wednesday, “He’s got to be pain free, so unless he says he’s pain free, then he’s close.” Los Angeles now has 22 active players on the roster.

Sutter acknowledged that the injury is in the “same area” as the injury he suffered during a preseason game on September 27.

“Yeah, it’s the same area,” Sutter said. “…He’s doing a lot to get game ready, so whenever that is, now we’re going to get to where we’re not here much. You can’t be having a guy who’s on your roster that’s questionable. We’re thankful we’re only going to San Jose and then back, and then Ontario’s here in town, so it’s pretty easy to get a guy. It’s easier to answer that before we go on the Edmonton-Winnipeg swing. Easier. Then we’ll know if he’s ready or not.”

With this move, the Kings created additional flexibility should they decide to make a roster move in the near future. In three games this season, Greene has no points, an even rating and eight penalty minutes. Jeff Carter has been serving as an alternate captain in Greene’s absence.