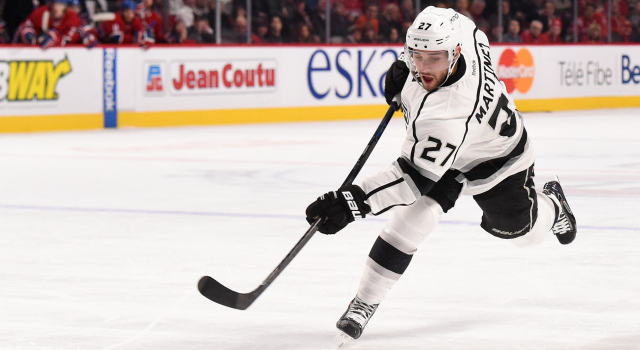 Based off this morning’s #fancystats piece that indicated (not that you’d need a spreadsheet to find out) that the Kings had been missing the net disproportionately when compared to overall shot attempts, I spoke with Darryl Sutter and a pair of players who have established strong shooting percentages in their NHL careers.

Sutter offered a reminder that the sheer volume of missed shots isn’t necessarily a bad thing, because that means possession is being maintained, and reiterated that the Kings’ volume of shot attempts has traditionally been a league high-water mark.

“More is better. It’s not a new theme,” he said. “It has to be consistent through your lineup. Obviously teams play different in terms of how they defend in their own zone. Sometimes your defensemen have to adjust, sometimes your slot forward has to adjust, things like that.”

I also consulted with Tanner Pearson, who has a 14.3% shooting percentage through 72 career regular season games, and Alec Martinez, who leads all club defensemen with a 7.7% career shooting percentage, which was buoyed by a 13.9% rate in 2013-14, when he scored 11 times.

Pearson replicating his 17.6% shooting percentage from a season ago will be virtually impossible; apart from that rate being completely unsustainable, the third-year King says he’s looking to get more shots on net this season.

“I think when you shoot the puck you want to try to create something,” he said. “I think the biggest thing last year, I don’t know if missed shots count but they were probably pretty high. I definitely want to hit the net more this year.”

Martinez couldn’t quite put his finger on why the Kings have maintained stellar possession numbers but rank last in the league with a 6.8% on-ice five-on-five shooting percentage since 2011-12, according to War-on-Ice.

“I think if I knew the answer, we’d be scoring a lot. That’s kind of been our MO,” he said. “We’ve played strong defensively and I think there’s a lot of things that go into it. I think, like I said before, the D have to do a better job of getting pucks there. We’ve got to have a net presence. We’ve got to have that layer two, that high layer, the F-three that you often times see a lot of opportunities pop out into that. I guess I can’t exactly pinpoint. You look at the positive, we do have good possession numbers and that’s the kind of style we play. We grind down a team down low and we just have to be better at being more opportunistic once we get those chances.”

Alec Martinez, on any reason behind the high percentage of missed shots thus far:
I would probably say that’s a product of the D not getting the job done. I know, myself included, that I have to do a better job of getting shots through to the net. It’s really difficult these days, and it’s something that we talk about all the time. A lot of teams, that’s a huge part of their D-zone. You look at Colorado and they really clog up the middle of the ice. I think as a D-man, you have to at least get it past that first layer. Sometimes, even if it goes off a shin pad or something in front of the net, you’ve got to at least try to get it there because you can get scoring opportunities just from that. It’s like the old saying ‘somehow, just get it to the net and good things can happen.’ But that’s something that as a D-crops that we have to get better at.

Martinez, on whether anything contributed to his high shooting percentage in 2013-14:
No, I don’t know. My mentality hasn’t changed. Maybe it’s just a byproduct of the way the league is going and how everyone is emphasizing blocking shots. I feel like it’s just kind of something that has come around. Maybe it’ll pass. I don’t know. What would you guys say – five, six, seven years maybe? I think they just started keeping track of it not too long ago. But that [13.9]-percent, that’s something that I really want to get back. I think I just have to get it through and create an opportunity for the forwards to put one in. Often times you’re playing against the best 30 to 60 goalies in the world, we’re not going to score from the blueline if they can see it. I keep on repeating myself, but the importance of just getting it there is the biggest thing.

Tanner Pearson, on the high percentage of missed shots early in 2015-16:
I think, especially the last two games, we’re trying to get the number of shots up. I think the games we lost, you look at the shots, they’re pretty lopsided against us. I think that was a key thing. I think we’re starting to hit more nets as a group and all it takes is one shot for it to go in or a shot to create a rebound.

Pearson, on whether he felt his was game-ready to start the season:
I think I felt pretty good. I think with the exhibition games, that helps out a lot even though they’re not up to regular season speed. But I think just taking the hits and giving the hits is a good way to transition into it. 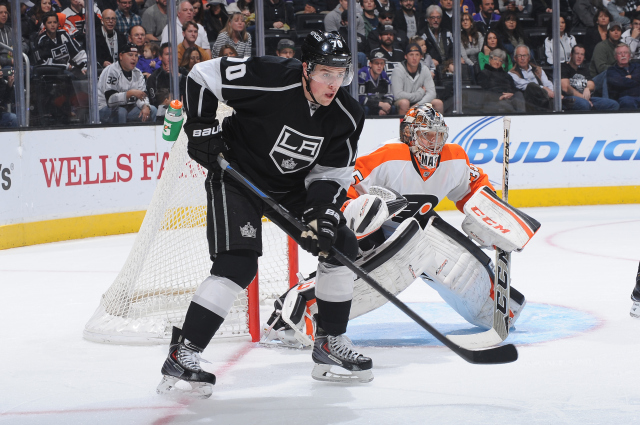