Time about to come for a patient Forbort 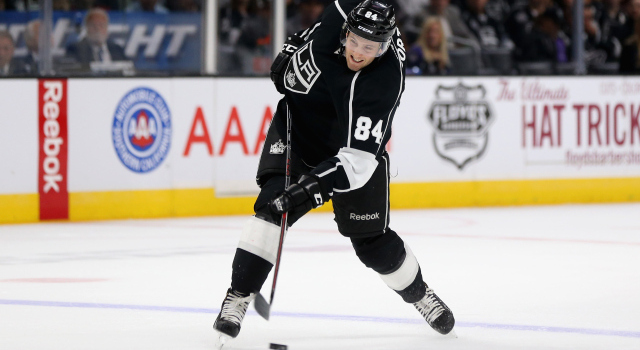 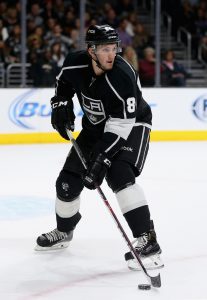 The Los Angeles Kings’ long-term defensive project has passed beta testing and is ready to hit the open market.

Derek Forbort, who has appeared in preseason games and was called up midway through last season but never was penciled into Darryl Sutter’s lineup card, appears to be on the verge of making his NHL debut with Matt Greene’s availability in doubt due to injury. Darryl Sutter said that the 23-year-old Minnesotan will be in the lineup when his home-state Wild visit Staples Center for the first of their two Los Angeles trips this season.

“It’s probably the very same as playing your first game of the year or your first playoff game, things like that where you’re always trying to do something good and you get a hit or make a good play or get the puck out, get it in, sort of simplify it early,” Sutter said.

Forbort was selected 15th overall when Staples Center hosted the draft in 2010, and, upon his debut, will become the final member of that year’s first round class to appear in an NHL game. Though he’s yet to dress for an NHL game, he has considerable experience with USA Hockey, having split time with the US National Team Development Program’s U-17 and U-18 teams in 2008-09 and 2009-10. He also has U-18 World Championship and two bouts of World Junior Championship experience sandwiched inside his three-year career at the University of North Dakota, where he totaled 45 points (6-39=45) in 115 games and earned all-academic NCAA honors in 2012.

“It’s definitely been a lot of hard work to get to where I am, and I owe a lot of that to the development staff here – Mike O’Connell, and obviously the guys at North Dakota for developing me into the player I am now,” Forbort said.

Los Angeles had planned to recall Forbort in February to replace Robyn Regehr, who was weakened by a bout of food poisoning prior to a road game against the Columbus Blue Jackets, but Forbort’s plane out of Boston was canceled because of heavy snow, and Regehr ultimately gutted out nearly 24 minutes of play in a 4-3 win.

“It helps knowing that if you stay patient, your time will come, and if you put the work in down there, you’ll get your chances here,” Forbort said.

Acclaimed for his skating, his long reach and ability to break up plays, Forbort is someone whose contributions will be tilted more to the defensive end. But he’s a modern NHL defenseman, and someone capable of dishing a crisp outlet pass up the ice and using his skating to jump into plays offensively. In the preseason finale against Colorado, he skated with Drew Doughty and was among the top defenders on the ice, earning an assist on Dustin Brown’s goal and issuing a clean hit on Jarome Iginla that sent the Western Conference legend heavily to the ice. He played assertive and was noticeable in a very good way.

“He’s one of the better offensive players in the league, and he’s also very responsible defensively,” Forbort said. “I think everyone’s taken on that role, to play a two-way game, and I’ve taken a lot of pride in that.”

When asked to name an NHL player whose skill set could ideally be similar to his own, he thought for several moments before providing an answer.

“Maybe like a Brayden Coburn, like a taller, good skater,” Forbort said. “He uses his stick well to defend and isn’t overly physical in the open ice, but down low is hard to play against.”

Derek Forbort, on whether it feels like a long time since he was drafted:
Yeah. I mean, it’s been a while since I was drafted at Staples Center, but I just tried to stay the course, and hopefully my time will come.

Forbort, on interviewing with the Kings before getting drafted:
We had good talks at the combine. That was a long time ago. I don’t really remember it, exactly. We obviously had a good relationship going into it, and then they took me, so obviously it went pretty well.

Forbort, on having his name called at Staples Center:
It was awesome. I was able to have a lot of family out here, and to experience that with them was pretty special.

Forbort, on whether he ever wondered if his time in the NHL would come:
I think I always knew if I stayed the course and kept working hard and kept working on my game and developing that it would eventually come.

Forbort, on whether the Kings told him what they’re looking out of him:
Just play my game. Defense first, be tough to play against and good outlet passes.

Forbort, on the biggest difference in his game since being drafted:
Obviously I’m a lot stronger now. I’m probably about 15 or 20 pounds heavier than when I got drafted. My goal back then was to be harder to play against and become stronger and fill up my body, and I think I’ve done that.

Forbort, on whether he’s surprised by the Kings’ slow start:
Yeah, I think everyone’s a little surprised how the season’s started. There are a lot of hardworking guys and a lot of good leaders in this room, so I’m confident that we’ll be able to turn it around.