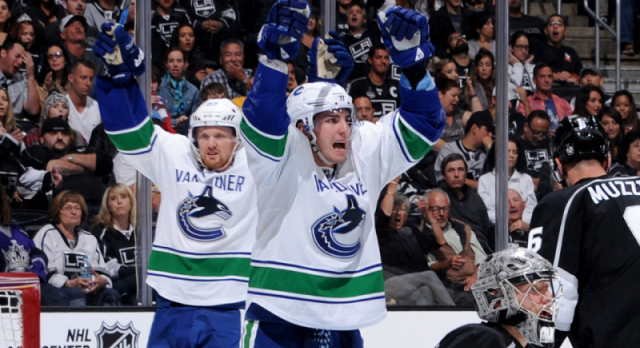 Despite multiple wake-up calls in the form of nine goals against and only two goals for, the Kings’ offense remained dormant in a dreary 3-0 loss to the Vancouver Canucks Tuesday night, throwing much of the off-season narrative about rest and redemption into suspicion only 180 minutes into an 82-game season. Jonathan Quick was very good on Tuesday and kept the score from being more lopsided, but the largest area of concern surrounding the team – the performance of its top players – was underscored in a feeble offensive performance in which only 15 of 54 shot attempts found their way on net. While the top players haven’t produced, this is clearly an issue that goes beyond burying the puck. Breakouts have been stifled, neutral zone play has slipped, turnovers have become commonplace, five-man units have remained shapeless and there has been nothing remotely resembling a unified, 60-minute effort despite a lineup featuring 10 players who have won multiple Stanley Cups and an additional five players who have won one. There were moments of encouragement – Los Angeles’ start was fine, and there was good urgency over the final six or seven minutes of the game – but the meat of Tuesday’s performance came during an ugly second period in which the Kings surrendered two goals, were out-shot 14-4 and took four consecutive minor penalties. When there were opportunities to climb back into the game with six minutes of third period power play time, there were few high quality scoring chances generated, and Ryan Miller was good when he needed to be.

It’s hard to get a read on the game from a possession standpoint, given that 39 of the Kings’ attempts were either blocked or missed the net. While the Gaborik-Kopitar-Brown line combined for six shots on goal and 12 shot attempts, there wasn’t much of an attack sustained by the Carter line, which combined for two shots on goal and only eight shot attempts. There were the efforts to try and get Milan Lucic going – Tyler Toffoli chose to dish across the slot to his left wing instead of shooting on a first period three-on-two rush, though the shot off his pass was sculled. Lucic decided to repay the favor one period later, passing the puck when there was a clear attempt on net available. That’s not any indictment of the two individual players, but rather a symptom of a funk enveloping the entire team. They’re out of sorts, as are many other top players. Including preseason statistics, Gaborik, Kopitar, Lucic and Jeff Carter have accounted for one goal and two assists in 28 combined games. Related: a 2.6% shooting percentage will ultimately rise.

Are these symptoms due to a lack of buy-in? A frail commitment to battling for and retrieving pucks, thus decreasing zone time? A lack of consistency in the puck’s advancement out of the defensive end? There are no definitive answers to these questions after a three-game sample size, even as concern grows. There have been in-season slumps with this club before – I’m looking at you, January and February – but the only thing remotely as alarming as opening the season by being outscored 12-2 in three consecutive divisional home games was when they opened the 2014 postseason by dropping three straight games to the San Jose Sharks, ceding 17 goals in the process. The Kings won the Stanley Cup that season, and Dean Lombardi explained in a recollection completely applicable to the current state of affairs of how the club was able to completely reverse what had happened in the start of that series. “Even when we had our eight-game losing streak, we didn’t have games like [the first two games in San Jose],” Lombardi said prior to the start of the 2014 Stanley Cup Final. “And your job is personnel, and you’re looking at this and saying, ‘Wait a minute.’ And I remember we went back after those games, I sat there with the pro scouts, and we’re saying, ‘OK, what are we seeing here? Why is this breaking down? Why is this happening?’ Things we hadn’t seen before. And obviously, our job is to look at the personnel. Are you skilled enough? Are you fast enough? What’s going on? This is again where Darryl and those coaches, in those moments, they’re the ones who are on the front lines, and their ability to take what happened in those first two games, keep that presence, that level state of mind and actually coming in in the morning, and sitting down with them, just watching the tape, and they were divorced of any emotion, and it was clearly to say ‘What’s happening here?’ and is this that we’re not capable of it, or we’re not doing what we’re capable of? And it was very clear in their mind we’re just not doing what we’re capable of here. We’ve got to get back to doing things the right way, and it completely took at that critical moment, I think it took the emotion out of it.”