Defense can improve, but high McNabb praise from Doughty 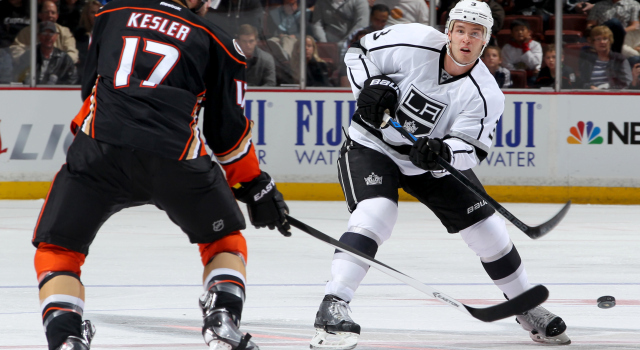 Though Drew Doughty has spent 58% of his five-on-five ice time over the last two seasons with Jake Muzzin, there have been some adjustments early in the 2014-15 season.

Brayden McNabb, who did not play due to a coach’s decision on opening night, has logged 31 minutes and 31 seconds of five-on-five ice time this season. 28:34 of that time has been spent alongside Doughty.

That might be a surprise, but it’s not unwelcome for a reigning Norris Trophy finalist.

“I absolutely love playing with Nabber right now,” Doughty said. “I think he’s a hell of a player, and he’s just getting better and better every game, and I also think I can help him a lot.”

There’s virtually no sample size, but what does exist suggests that the pair should continue to get a look. According to Stats.HockeyAnalysis.com, the club has directed 67.4% of shot attempts to the attacking net while the two have been paired together, and the club hasn’t allowed an even strength goal. When the two have been separated, only 52.6% of all shot attempts have been directed to the attacking net.

Thus far, McNabb has adhered to an approach similar to Rob Scuderi’s. When you have the puck, remember that Doughty is to your right and can do very good things with it.

“He’s one of the best, so all you’ve got to do is kind of read off him and give him the puck whenever you can because you know it’s going to be a great play,” McNabb said. “I’m just kind of reading what he does and making sure I’m making my good first pass and letting him do his thing.”

Obviously, because the club is 0-3-0, this isn’t to say that all is well with the blue line. Los Angeles has allowed 12 goals through the first three games, Jake Muzzin is a minus-six, and newcomer Christian Ehrhoff is a minus-five. The two have skated alongside each other over the last two games, but with Matt Greene not able to participate in practice while he was being evaluated for an injury, Muzzin skated with Alec Martinez and Ehrhoff with Derek Forbort, who is yet to play in a regular season game.

Should Greene not play on Friday against visiting Minnesota, and should Ehrhoff end up alongside Forbort, that would mark the third different primary defensive pairing through four games for the newcomer, and that’s a difficult way to generate a steady rhythm early in his Kings tenure.

“Probably the toughest part would be Hoff. He’s never played with any of us before,” Doughty said of the pairings. “It’s definitely an adjustment, and he’s playing on his off-side a lot of times, which is a really difficult task. It takes a little bit of getting used to, but we all know in here that we have a better D-corps than we’ve showed, and we need to start playing more physical defensively.”

There are also glaring offensive concerns after the team has opened the season with two goals scored in three games. Drew Doughty’s assist on Nick Shore’s goal against San Jose is the only point recorded by a defenseman thus far.

Brayden McNabb, on whether he’s happy with his early chemistry with Drew Doughty:
Yeah, I mean it’s gone fairly well so far. We haven’t won, so that’s our main concern. We need to do more to help our team win, so we’re going to continue that and go from there.

McNabb, on using an elevated ice time to build an early season rhythm:
When you play more, you’re into the game more, and like you said, it’s more of a rhythm. You enjoy it. You always want more ice time, and that comes with playing well and earning it, so you’ve just got to continue to do that as a player.