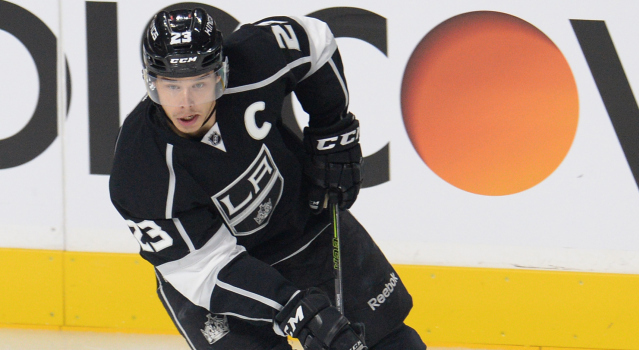 On the 5-1 loss to San Jose:
We were pretty sloppy. Sloppy on our rushes, sloppy in our D-zone. That’s probably most of it, but the other part is compete – in the corners and making hard plays coming out of our zone, going in. We didn’t play very well.

On whether San Jose got fortunate bounces early:
You don’t win these games on bounces, really, at this level. It happens with good teams, and if you’re playing well you can overcome those, but we weren’t playing well. [Reporter: What about staying out of the box?] That helps. Especially when you look at their number one unit, that unit’s probably been together for four or five years, probably. They move the puck very well and have a very good idea of what they want to do and are pretty good at executing it. I think that’s one of the things that team thrives on, is that first unit’s power play.

On surrendering an early lead in the home opener:
Yeah, I though the first little bit we had some momentum and we didn’t keep it. It got out of hand in the second. Like I said, we were sloppy in our own zone, and they capitalized.

On whether he’s surprised with the result after training camp:
I don’t think that’s any different. I mean, we had a good camp, but that’s another level, and that’s where the compete needs to go up in the regular season, so we’ve got to find it somehow. [Reporter: Intensity, too, is all part of that compete, isn’t it?] Yeah. I mean, it’s kind of hard to do one without the other. That’s where a team can’t rely on one or two players. We need, the way we play and the systems and the type of game we play, we need everyone at that high compete level. That’s first and foremost for us.

On his first period hit on Logan Couture:
The guy turned the puck over skating backwards. I stopped, and he was coming forward. It was just a hit, you know? I don’t think there was much to it, really, other than two guys going at each other.