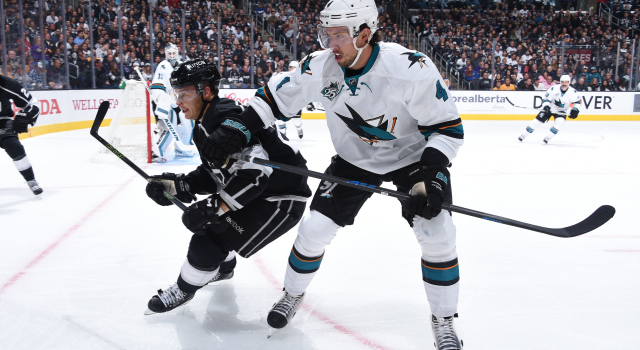 On whether it was disappointing to lose the home opener after holding a lead:
Gotta check. You don’t check, you can’t score. We had a lot of guys, especially top guys that weren’t interested in that part of the game.

On Milan Lucic’s match penalty:
It’s a borderline even roughing penalty. I don’t know how many of you guys were still in your seats, but I was still in mine, and at best, that’s a minor penalty. That’s it. I won’t say [any] more.

On whether the team “sent messages” late:
It doesn’t serve any purpose, quite honest. A lot of that stuff after the whistle, if you do it early in the game, it might make more of a point, but I think it was a little bit of frustration on three or four guys’ part to try and get the team involved in that part of it.

On the Lucic-Kopitar-Gaborik line:
Flat.

On the importance of staying out of the penalty box:
Yeah. I mean, as it goes on. They scored two, quite honest, lousy power play goals. Both of them were just clear faceoff losses by a left-handed centerman and a right-handed centerman. Just clear faceoff losses, and the first one was, I think, off Pavelski, I beliebe, and the second one’s a screen all the way through. But you’ve got to do a better job. A big part of penalty killing is winning faceoffs.

On whether he was surprised that the first line was flat in the first game:
Yeah.

On not generating many scoring chances:
If you don’t check, you don’t have the puck enough. If you don’t have the puck enough, you can’t score. We had lots of opportunities to shoot in the first period, actually, when the score was 1-1, 2-1 on odd-man rushes and didn’t get shots. They were guys that have got to shoot pucks. Guys that are good at it, they’ve got to shoot the puck. Make the goalie work a little bit more.

On whether Matt Greene made a “persuasive case” to play:
Yeah. Played fine. Not an issue. It was a surprise to me.

On whether the next practice will be “brutal”:
We play Friday, so I think you get ready for Friday. It’s not about tomorrow. This is Wednesday, tomorrow’s Thursday, and we play Friday.