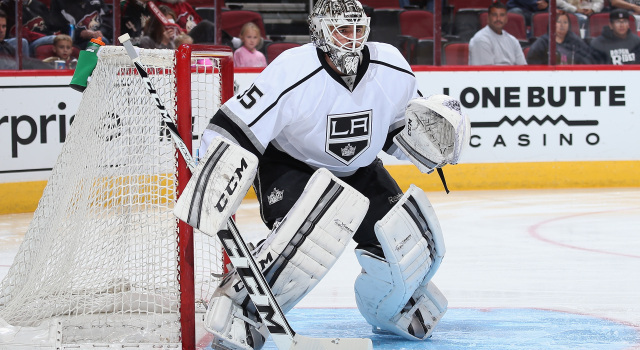 The New York Islanders have claimed goaltender J-F Berube off waivers from the Los Angeles Kings, as first reported by Arthur Staple of Newsday.

With Berube claim, #Isles guarding against Halak not being ready. Williams will go to BPT.

Before getting down to the brass tacks, here’s wishing all the best to Berube, who on top of being an emotional leader and very good goaltender, was a class act and always helpful and friendly during our interactions in Southern California and Southern New Hampshire. Enjoy Brooklyn, J-F.

Though he suffered an ankle injury in Game 1 of the Final, Berube’s fingerprints were all over the Calder Cup. He posted a 37-9-4 record with a 2.18 goals-against average and .913 save percentage with two shutouts in 2014-15 before claiming an additional 13 postseason wins. In ably inheriting the goaltending reigns from previous starter Martin Jones, he continued to progress under the tutelage of Bill Ranford and Kim Dillabaugh to the point where he was capable of battling for a back-up position. Looking for an experienced NHL goaltender capable of stepping in seamlessly should Jonathan Quick perhaps need more than the occasional night off, the Kings turned to Jhonas Enroth to serve as their number two, which meant that there was the threat that Berube could be claimed were the Kings to attempt to assign him to Ontario. Enter the Islanders.

With Berube leaving the organization, expect to see the announcement of Peter Budaj signing a one-year contract. Though Patrik Bartosak will ultimately be expected to absorb most of the minutes vacated by Berube, he underwent recent surgery on his thumb and will be out indefinitely. As Bartosak heals, Budaj and Michael Houser should be expected to split the starts for the Reign. Houser, 23, is a former London Knights goalie who split time between AHL-San Antonio and ECHL-Cincinnati over the last two seasons.

As Lisa Dillman noted, when Bob McKenzie tweets that teams may be interested in a waiver-bound player, treat it as Gospel.

Everybody on waivers yesterday (except Berube, Corrado and Byron) cleared.