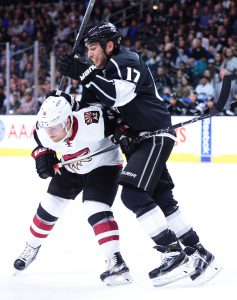 Darryl Sutter spoke earlier today about the use of video to get players acclimated to the club’s systems and positioning, and for several newcomers – among them Milan Lucic, Jhonas Enroth and Christian Ehrhoff – this preseason schedule is important in that process.

“…Even though you think that teams like Boston and Los Angeles are similar in style, there are differences in the game in where you want ‘em, and obviously Christian’s got a big adjustment to make in terms of the way we want our defensemen to play gaps and play on the off-side and where he wants his stick in certain situations, things like that,” Sutter said.

Lucic understood the importance of the higher degree of film sessions early in his tenure in Los Angeles.

“[The amount of video watched is] definitely a lot, because I think the coaches kind of want to go over everything and make sure that everyone understands what they need to do in every situation,” he said. “So obviously there’s going to be more video now than there is in the season because they expect you to know it in the season. Right now is the time to teach, so it’s expected at this time of year. For me especially, I think it’s real important because of being on a new team and playing a new system for the first time in my career. I’ve only played for one coach, and here I am for the first time in my career with a second, so I’m just trying to pay attention and learn as much as I can as quick as I can.”

The left wing will play tonight against the Anaheim Ducks (7:00 p.m. / Honda Center / Prime Ticket / KABC 790 / I Heart Radio), and while he’ll be skating opposite Brian O’Neill instead of Marian Gaborik, who has the night off, not much changes in what Lucic will try to get out of the game.

“I think it’s the same purpose,” he said. “I think, like I said before, the main thing is just getting your own game going. And then once that goes, everything else, the chemistry falls into place. Again, I don’t think it’s going to cause a wrinkle at all. I think it’s just you have to go out there and do what you do and play within yourself and play the way that you can and keep going up so that once the season starts you’re ready to go.”

Milan Lucic, on what he’s looking to accomplish in the preseason:
I think I’ve had a lot of hesitation in my game just trying to, I guess, fit in and play the system and all those types of things. So for me, it’s just getting comfortable and trusting in myself and my skillset and being the player that I can be for this team. That’s basically it – just getting comfortable, like I said, and taking the hesitation out and not second guessing myself and coming onto a new team and contributing the way I know I can. So it’s all about believing in yourself, believing in your teammates and getting that confidence before everything gets going two weeks from now.

Lucic, on his first experience playing as a King at Staples Center:
It was cool. Staples is a great arena. I mean you never really know what to expect in a preseason game, but it was great to see that the fans were excited that we were back playing again and I think that makes it more exciting for us as players, as well. Obviously I think it’s a building that creates a lot of energy and we need to feed off of that.