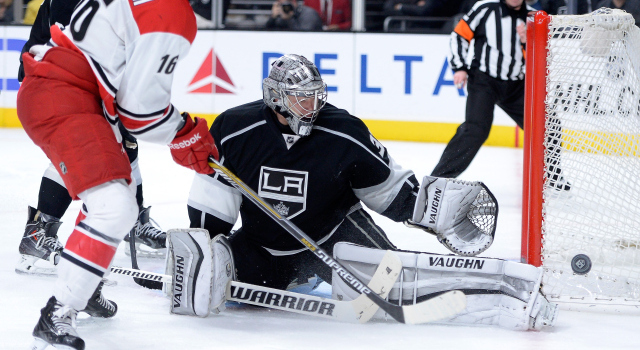 Dustin Brown and Drew Doughty aren’t the only Kings to be sporting a slimmer look at training camp this season.

Though his listed weight of 218 pounds is only two pounds less than his listed weight entering last year’s camp, Quick appears to be slimmed down and in very good shape – like many teammates and others around the league who put in good work over the summer.

“Our test results are by far the best we’ve ever had,” general manager Dean Lombardi said on Tuesday. “I think the most important thing is when you get punched in the gut like that, I think they learned from it.”

The goaltender credited his appearance to additional time in the gym, and not having to spend a summer rehabilitating from injury after spending the summer of 2012 recovering from back surgery and the summer of 2014 working back from wrist surgery.

“It wasn’t much different than what I’ve done in previous summers,” he said. “It was just two months more to do it, so you accomplish a lot more because of that. That and you’re not really dealing with any injuries or anything like that. The past few summers before that, it was like modified workouts because you can’t do certain things because of injuries or whatever you have going on. So yeah, it was easier to get into the routine and just stick with the routine for four or five months or however long it was.”

Quick had a heavy workload in 2014-15. As the team attempted to fight from behind to solidify its playoff footing, it rode Quick to the tune of 72 games, which tied a career high, and 4,184 minutes, the second-most time he logged in a crease in his career.

Is there an ideal amount of games played he’s shooting for in the coming year?

“It’s all by feel and communication with the coaching staff,” he said. “We’ll figure it out.”

Jonathan Quick, on whether his weight fluctuates over the course of a season:
I think over [the season] I tend to gain weight, but there are times where I lose weight. So you’re just trying to balance it. You’re constantly trying to keep tabs on it and if you feel like you’re dropping a bit, you notice you’re dropping some on the scale, then you tend to increase your diet a little bit, you boost it up a little bit. So you’re just always tweaking with it, and our trainer Matty Price is on point. He’s on top of everybody and making sure everybody is right around the weight they should [be].

Quick, on always wanting to play:
That’s why you play. You work hard all summer, you work out, you want to play games. Everyone wants to play. You look forward to those opportunities when you get the chance to play and try to help the team win.