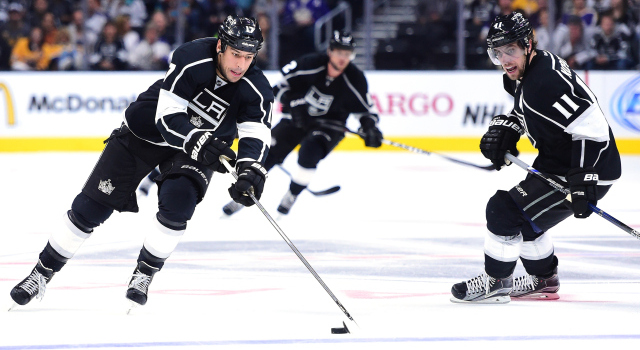 On the 3-2 win over Arizona:
I think some of the guys that hadn’t played for a while were sluggish, but [we] found a way. [Reporter: A lot of penalties, though?] Not as many as last night. Last night, the first period was full of ‘em. We had two five-on-threes last night, and I think they had the one tonight, and they scored sort of on the deflection-bounce. Preseason.

On players carrying their instruction from practices to games:
We’re trying to get the preaching in and practicing in and then the playing in, so hopefully it all connects together. You’re trying to get all your systems and everything down and then apply it to games, and with the number of new players, we need them to figure it out in a hurry to see who could play where. We’ll be patient, but at the same time we need to make sure that it works. [Reporter: Are you looking specifically at wins, or is it not that important?] No, you want to win. You want to win every game. I mean, we want to go 100-0 if we can, something like that.

On what has stood out in training camp:
I think there’s good competition. I think if you look at the past three or four years – four years for sure – there hasn’t been a lot of competition at training camp. It’s basically been pretty much in stone what your roster was because there wasn’t much turnover, and there’s opportunities for guys, but at the same time, there are returning veterans, returning star players, elite players. We need to really step their game up when the season starts. They have to build towards that.

On whether the thrown stick at Dustin Brown should’ve resulted in a penalty shot:
Absolutely. [Reporter: Was it just a preseason-] No. It should be a penalty shot.

On whether he liked the strides made in the team’s checking:
I didn’t think we were that good in that area. I thought we were really sloppy in the checking part of our game.

On his assessment of the Kings’ special teams, to this point:
You’re just working on your special teams a lot of it during games. We had a power play practice a couple games ago. A little bit is personnel. Special teams, you need to be working together at it more than anything, and I think our power play has the opportunity to have a couple of really good units, and let them sort of fight over it.

On the Kopitar line:
I think they were sluggish. It takes some time to get it together, and we’ll play ‘em lots. [Reporter: But it looks like they should have good pieces to the puzzle to fit together, right?] They should. They’re all top guys that complement each other, they all bring something a little bit different.

On three-on-three overtime:
I like it because I think it’ll get decided before the shootout. I think there’s a better opportunity for it to be decided – and we saw it last night, too – that I think there will be penalties three-on-three, which means that there’s probably more power plays in a three-on-three situation than there would be in a four-on-four. [Reporter: Drew said he loved it because it was fun, too, just being a part of it, and I think that helps from a players standpoint, doesn’t it?] Fun is winning. You can make that point to him.

On whether there will be “juices flowing a little bit extra” against Anaheim on Friday:
I don’t think so. We’ve got guys trying to make the team. I couldn’t even tell you who’s playing for them or anything. We’re trying to focus on that. It’s way more important than who we’re playing. [Reporter: Do you expect the competition to be really, really extra hot, though, in the next several days because of guys on the bubble?] That’s up to the players, and we want it to be competitive, and as we said, they’re fighting for opportunities to play here. I mean, that’s clear. That hasn’t been the case [previously].