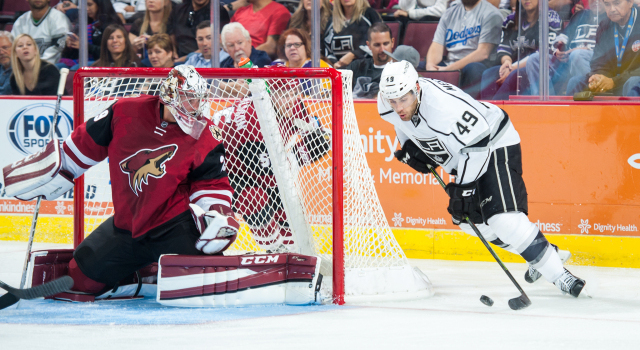 Tanner Pearson, on playing his first shift since breaking his leg:
It was definitely nice to be back out and trying to have fun playing for something. Kind of just putting everything in the past, move on and play it shift-by-shift for now on.

Pearson, on how many shifts it takes to rekindle chemistry with Tyler Toffoli:
I thought tonight it was pretty easy. It’s pretty simple as a player. I think we’ve played together long enough and watched each other even before that. We kind of know how each other work and where each other is going to be.

Pearson, on his play on Tyler Toffoli’s shorthanded goal:
Well, Vinny rimmed it pretty hard but either it was getting past me or I was stopping it and I knew he was flying. So I knew he was either going to get it at the other end or get a pass from me. So he got the pass from me and had a break away.

Pearson, on whether he accomplished what he wanted to in the first preseason game:
Yeah, I thought everyone played pretty well. …It was a good outing by our team I thought and it was nice to come out on top.

Pearson, on whether he feels like he has moved past his injury:
Yeah, it was definitely nice to be back out there, like I said. I’m just looking forward to that season opener.

J.F. Berube, on whether he is happy with his performance in the first preseason game:
Yeah, it feels good to finally get into a game and get back into game shape and obviously it went well today. Guys worked hard and I think there were jitters at the beginning, but as soon as the game went on we settled down and we kind of set our tempo.

Berube, on his summer rehabbing from injury:
I always felt good in the gym. It was more on the ice that was an issue. So I tried to stay off the ice as long as possible and I started skating maybe three weeks ago. It was big but I don’t think it slowed down my summer at all. It was good to spend more time in the gym and put some more muscle on me. Getting stronger in the gym, I think that’s something that’s important for me and obviously I feel good on the ice now.

Berube, on whether it was a quick turnaround for him being in a game situation:
Yeah, for sure, but I think I knew what was ahead of me. So I was prepared for this and I worked harder than I would usually do during the summer. Even though it was only three weeks, it was three intense weeks and I feel like I caught up the time I lost.

Berube, on whether it was helpful to face shots through traffic early on:
Definitely, in practice you kind of see situations but there is nothing like traffic in the game. The play is quicker and there are more bodies in front of the net. So it was kind of important for me to battle harder than I would usually do. I was seeing pucks well and the D was boxing out guys, so it was a good night.

Berube, on returning to Bakersfield:
Yeah, it’s good to be back here and play here. Obviously I played here three years ago now, for two years when I was in Ontario. So it was fun to be back in this building.

Berube, on the difference between the ECHL and AHL:
Guys are smarter. The play is obviously a lot quicker. More system, it’s a little bit more controlled out there. But in general, guys are more mature, guys are bigger, better decisions, quick decisions, too. Pretty much overall, everything is a little quicker it’s a little bit of an adjustment.