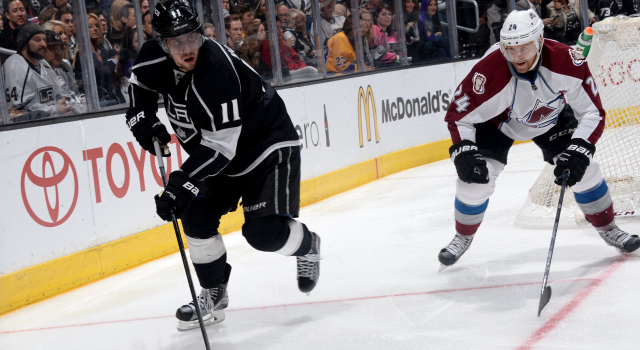 Anze Kopitar has been eligible to sign a contract extension with the Los Angeles Kings since July 1, but don’t expect an announcement on an extension for the star center in the immediate future.

The Kings and Kopitar are are “not even in the ballpark” in their discussions, Kings General Manager Dean Lombardi told LA Kings Insider over email when asked whether the two sides were “close” to reaching an agreement.

There is still ample time for the two sides to reach an agreement. Kopitar’s contract expires on July 1, 2016, and given the 28-year-old’s place amongst the game’s most elite centers, it would be among the most surprising developments of the upcoming season were the discussions to drag out until then. Given today’s exchange, though, it does not appear as though an agreement is on the immediate horizon.

A follow-up email to Lombardi to gauge whether discussions would extend into the season or whether they’d be shelved in the hypothetical event the two sides would be unable to come to an agreement before the start of the regular season was not immediately returned.

An article posted by Ken Campbell of The Hockey News on Monday hypothesized that one reason for an early delay in agreements for new contracts for Kopitar and Steven Stamkos was because of the continued diminishing value of the Canadian dollar, which restricts the extent to which the salary cap raises annually. It also (inevitably) links Kopitar’s and Stamkos’ contract negotiations to the eight-year, $84-million contracts signed by Jonathan Toews and Patrick Kane in the summer of 2014.

From The Hockey News:

When Bowman signed Toews and Kane to their contract extensions last July 9, the Canadian dollar was trading at 94 cents compared to the U.S. dollar and there was no reason to believe things would change drastically. But the Canadian dollar has lost a mind-blowing 20 percent of its value since then, trading at 76 cents today.

Would Bowman have signed those deals with Kane and Toews if he had owned the crystal ball that almost every economist on either side of the border did not have at the time? We’ll never know, but we do now know that it will be much, much more difficult to fit those two deals under the salary cap if the Canadian economy continues its decline.

According to War-on-Ice, the Kings have $50.98-million allotted to 15 players for the 2016-17 season, figures that include a cap recapture penalty for Mike Richards but do not account for Slava Voynov’s contract. In addition to Kopitar, Milan Lucic, Trevor Lewis, Christian Ehrhoff, Jeff Schultz, Jhonas Enroth and Jamie McBain are due to become unrestricted free agents on July 1, while Brayden McNabb is eligible to become a restricted free agent.