Jim Fox to be inducted into the SCSB Hall of Fame 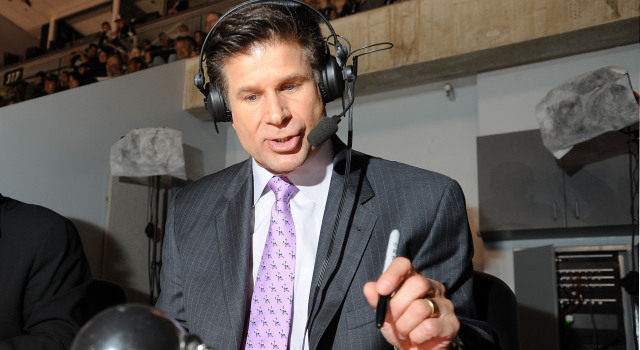 Jim Fox, along with Rob Fukuzaki and the late Joe McDonnell, will be inducted into the Southern California Sports Broadcasters Hall of Fame on January 25, 2016. Fox, who will begin his 26th season as the Kings’ television color commentator this fall, joins 2002 inductee Bob Miller and 2009 inductee Nick Nickson as current Kings broadcasting figures to have been inducted into the SCSB Hall of Fame; former Kings television reporters Stu Nahan and Rich Marotta have also been inducted.

In January, 2015, the SCSB honored Fox with the Best TV Play by Play award for the second consecutive season and fifth time in the last six seasons. At that luncheon, the Kings also won the 2014 Outstanding Acheivement Award, while Bob Miller won best TV Play-by-Play (for the 10th time), Patrick O’Neal won the TV Pre/Post Game award for Kings Live for the second consecutive year, Nick Nickson was nominated for best Radio Talk Show for Kings talk and for best Radio Play by Play, and Daryl Evans was nominated for best Radio Analyst. Nickson will also be honored with the 2015 Foster Hewitt Memorial Award at this November’s Hockey Hall of Fame induction ceremony and will have a plaque of his raised in the Great Hall later this year.

If you’d like to express your appreciation for Fox’s clear and concise analysis of Kings hockey, you’re welcome to join him and his wife Suzie at the fifth annual Sunset Sip, a wine-themed gala benefiting The Guidance Center, a Long Beach-based outreach center that provides comprehensive mental health services for disadvantage children and families in the area.

Thanks to everyone for the kind words Thanks to the SCSB for the honor! pic.twitter.com/JlSFB2FTfb