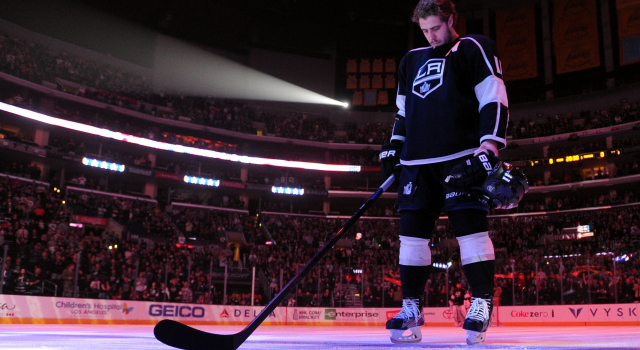 Though negotiations with Anze Kopitar over a contract extension are “just starting,” according to a source in Kings hockey operations, those talks are expected to pick up steam over the coming month, and there is optimism that a contract extension will be finalized this summer.

One of the reasons for the timing of the current contract push is that the Kings needed to finalize new contracts for a heavy crop of restricted free agents. That had been communicated to Kopitar and his representation, and because the final six RFAs signed contracts with the Kings over the previous two days, Kopitar’s extension now becomes the club’s highest and most forefront priority. Because he would be resigning with Los Angeles, he would be eligible to sign an eight-year contract extension.

Kopitar, who turns 28 next month, previously signed a seven-year, $47.6-million contract that will expire after the conclusion of the upcoming season. Selected 11th overall at the 2005 NHL Draft, the Jesenice, Slovenia native has 218 goals and 610 points in 683 career games in addition to two Stanley Cups, three All-Star Game selections, two Selke Trophy nominations and a Lady Byng Memorial Trophy nomination.

Other Kings whose current contracts expire after the coming season include unrestricted free agents Milan Lucic, Trevor Lewis, Jhonas Enroth, Jamie McBain, Jeff Schultz and Brian O’Neill, and restricted free agents Brayden McNabb, Derek Forbort, Jordan Weal and a collection of players who are expected to play the significant majority of their games at the AHL level this season.