Williams: “They’ve got this thing called the ‘salary cap.’” 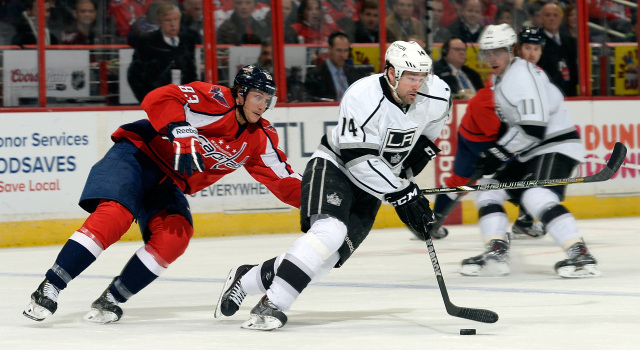 In some of his first duties as Capital, Justin Williams appeared on a conference call with the media on Thursday morning to discuss the circumstances that led him to sign a two-year, $6.5-million contract in Washington. In regards to conversations with the Kings on Wednesday – and there were some – he noted that the club’s salary cap pinch complicated negotiations.

“Obviously we enjoyed [success],” he said about his 500 regular season and playoff games with the Kings. “We made the playoffs, except for the first year when I came midway through, we made the playoffs every time except for last year. I enjoyed a pretty good stretch there of three years with two championships and a conference final. Obviously things got derailed this year because of a lot of occurrences and things beyond individual control. Hey, that’s part of a team. No team stays together the whole time if you don’t win. Obviously there are some changes in L.A. this year because of that, and everyone’s looking to get better. I know Washington’s looking to get better, and I hope to prove that I’m going to make them a better team.”

Read on for more background on his decision, and how a young son influenced his decision to join the Capitals had the Kings not been able to work out a new contract.

Justin Williams, on what led to him sign with Washington:
I think Washington was, even before we had a deal done, was a team that my agent, my family and I looked at as a potential team because I liked what they did in the playoffs last year, even though it was a Game 7 loss. I liked the way the team played and they were exciting to watch and they played hard and I want to be a part of a team that has that type of attitude.

Williams, on how much family and hockey weighed into his decision to sign:
Well, it’s obviously both. You have to get the balance chart out and weigh the positives, which direction the team is going, the city you’re playing in. There are a lot of things that go into it. Obviously, my first chance at unrestricted free agency and everyone said how exciting it is. And yeah, it’s exciting, but darn is it stressful. I wasn’t expecting that much stress or for it to go on for that long, but the end result is where I want to be. I talked with the coach yesterday before I signed and he gave me the lay of the land a little bit and what the team is all about and pretty much a lot of stuff I already knew.

Williams, whether he felt a sense of comfort after speaking with Barry Trotz:
Absolutely, I think as you move forward and get to be a little older and you get to know a lot of players in the league and you get to know a lot of coaches as well. Barry is one guy I haven’t heard a bad word from. Sometimes you can get coaches where you can say ‘Yeah, well he’s a real hard-ass or he’s like this or like that.’ Barry kind of had both demeanors – hard when you need to be but kind of knows his players and has been around the game a lot and knows how they’re feeling and how to coach them. Obviously he’s been in this league a long time for a reason and he assured me that I’d be a big part of this team and that they really wanted me and I expressed the same back to him.

Williams, on how his game elevates in Game 7s and how it can help Washington:
Well, I do get unfairly asked that question quite a bit. My Game 7 record is a product of the teams I’ve played on. I’ve played on some great teams, guys are able to get that little goal or get that little extra that it takes in a Game 7 because everyone knows how important every single play is. That’s basically just a product of the great teams I’ve played on, the great guys I’ve played with and that’s why I kind of have that, I guess, mantra hanging over me. But this is a great team as well that I’m coming to. I hope to help us get to the next level.

Williams, on whether he was aware of Washington’s record in Game 7:
Yeah, as a hockey fan I think it’s tough to not be familiar with your competition and other teams throughout the league. I mean, there’s a lot of years that go into everything and it could be a Game 7 loss 10 years ago that none of the players on this team had anything to do with, but it still gets put on that record. It is what it is. As I said earlier, and I’ll reiterate again, this team battles hard and I like what I’ve seen and I’m just going to try and be me. Come in here and try and be me and hope that’s enough to earn the respect of my teammates and help us get over a little hump.

Williams, on playing with Alex Ovechkin:
Well, we shoot the same way but I know he’s on the left wing a lot and he’ll probably get moved around a lot. But I’ve played with a lot of great players who don’t need a lot of room or a lot of space and a lot of time to get a shot off and score. They’re dynamic in the way they play. But Ovie, he’s not just a goal scorer but he has that physical element as well. He gave me a call this morning. I wasn’t around to answer it, but he just wanted to welcome me to the team but he’ll see me soon and it was a nice gesture from Ovie to say hi and I anticipate working well with him among other guys.

Williams, on whether his discussions with Los Angeles gained any traction yesterday:
I had the best success I’ve had a hockey player in Los Angeles. Certainly not to take anything away from the Stanley Cup I won in Carolina, but year-in, year-out, team success and individual success was great. We obviously made a lot of friends. After six or seven years, you’re going to make a lot of friends. Hopefully friends for life, but the name of the business is hockey, and it’s about winning, and now it was just time for me to move on. Obviously I spoke to L.A. a little bit yesterday, but they’ve got this thing called the ‘salary cap.’ It comes into play a lot, especially with a lot of teams spending to the cap. It is what it is. I’m going to move on, but I’m always going to have fond memories.

Williams, on Trotz reaching out on Wednesday:
As you go throughout the day, constantly you’re weighing pros and cons of the team you’re at, and the city you’re in, and the coach you’re playing with, your potential role with the team, and obviously I felt I would be an important piece of that, and Barry just kind of tipped me over the edge and made me feel as if I would be. I had a great conversation with him. I have three small children as well and a wife that I have to look to as well and try and make happy, but I know my son’s excited. He woke up this morning and said, ‘Daddy, where are we playing?,’ and I told him Washington, and he was all smiles. That passed the test, so I’m happy about that.

Williams, on whether he weighed any other serious offers:
As much as I’d like to, I don’t think that’s fair to any other team. But there were obviously some offers out there that I pondered. This was just the best fit for me, I thought.

Williams, on how much of the league his son is aware of:
It’s actually funny. He’ll be seven tomorrow, and he gets it that his father plays in the NHL and whatnot. He even said a month ago, he said, ‘Daddy, if we don’t go back to L.A., I think you should go to play with Ovechkin, because he’s the best.’ It’s just funny. You watch the awards, and the way kids think, and it’s pretty sweet. I just hope he has one of my jerseys on him for the games.

Williams, on “pushing 34”:
Easy, easy. 33. Listen, I’m going to continue to play as long as I feel like I’m productive and I’m healthy, and I have been over the past few years. I’m going to say the thing that everyone says – ‘I haven’t felt better.’ But, it’s true. My head was obviously upset when I didn’t make playoffs this year, but I think my body is saying thank you. I’ve had a lot of rest, and I should be ready to go right out the gate.

Williams, on what Washington has to do to find more playoff success:
I don’t know. Sometimes it’s just a face in the room, it’s an intangible quality. Sometimes it’s certain guys stepping up and having a big game, making a big play. But I just think this team was so close last year – and I know a lot of teams around the league feel that way. You look at the way they played, and as I said, I don’t know if I’m the answer, but I’m going to do my darndest to prove to everyone, to my teammates and myself that I can be a difference-maker, and I want to be for this team.