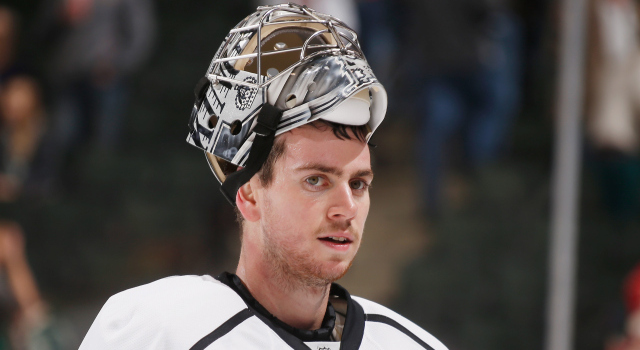 Martin Jones’ career as a Boston Bruin was short lived. The former King has been traded from Boston to San Jose in exchange for a 2016 first round draft pick and unsigned prospect Sean Kuraly, Pierre LeBrun of ESPN.com reported Tuesday.

Not that Pierre needs any confirmation, but others have also reported the trade to be a done deal (as have the Sharks).

This is an exchange that may not sit well with the Kings, who viewed Jones either at or just below the top of goaltenders available this summer and will now face him multiple times as part of the Los Angeles-San Jose divisional rivalry, which picks up where it left off when the season opens October 7 at Staples Center.

SJ is working on a new contract for Jones. LA was worried SJ was would offer-sheet him.

Jones, an undrafted free agent signed by Los Angeles after a strong training camp in 2008, is 16-11-7 with a 1.99 goals-against average, a .923 save percentage and seven shutouts in 34 career games. He was due to become a restricted free agent on July 1; according to my contacts within hockey operations, negotiations did not exactly go expeditiously, which led to his name surfacing in trade talks.