Free agency opens Wednesday, and the Kings need a goalie 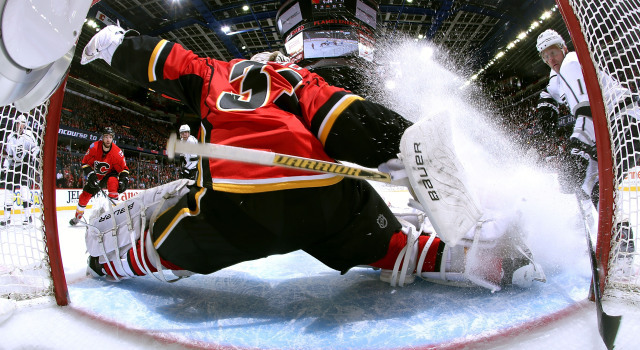 When the free agency period opens across the National Hockey League on Wednesday, the Los Angeles Kings will focus on, amongst other priorities, trying to secure a back-up goaltender.

In conversations with hockey operations, it has become clear that the Kings’ intention is to sign a “clear-cut” number two goalie, and not foster a competition similar to training camp in 2013 when the team acquired Ben Scrivens as part of the Jonathan Bernier trade and invited Mathieu Garon to training camp, with entrenched AHL starter Martin Jones getting a look, as well.

If the chips fall the Kings’ way this week and they are able to secure the services of a number two goalie via free agency, that would mean J.F. Berube would be likely to begin the season in AHL-Ontario.

There are a number of options available, though some come with asterisks, and there will be competition for their services. Listed in descending order by last year’s NHL cap hit, there’s Viktor Fasth (coming off a season referred to by the Edmonton Journal as “disastrous”), Karri Ramo (whose agent was quoted by Pierre LeBrun as saying he has already been approached by five teams in addition to the Flames), Michal Neuvirth (who, like Ramo, may be looking for a starters’ role but could find one tough to get), Josh Harding (who is expected to retire, per the Minnesota Star-Tribune), Jonas Gustavsson (who hopes to remain in the NHL, and not return to Sweden, per MLive.com), Peter Budaj (who was in the AHL for the entire season and did not post encouraging numbers), Jhonas Enroth (who is expected to file for free agency, via the Dallas Morning News), Thomas Greiss (who could be a “reliable back-up” and an “attractive option”) and Ray Emery (who is not expected to re-sign with the Flyers).

A full list of available free agent goalies is here; it includes noted Kingslayer Richard Bachman (though it would be a stretch to expect him as an NHL-level back-up next year).

Martin Jones, who backed up Jonathan Quick in 2014-15 and the second half of the 2013-14 season, was traded to Boston on Friday as part of the Milan Lucic trade. On Tuesday, he was traded from Boston to San Jose.

It’s unclear how the Kings’ approach to free agency has changed, or whether it has changed at all, since news broke yesterday that the team had decided to terminate Mike Richards’ contract.

Though Los Angeles has $62.05-million allotted to 17 players for the 2015-16 season – numbers that reflect the termination of Richards’ contract – it is not clear how much of the increased capital the team plans on spending, given the uncertainty over Slava Voynov’s ongoing legal process and “whether [Richards’] termination will withstand an inevitable legal challenge,” as described by TSN sports legal analyst Eric Macramalla on Forbes.com. Next year’s salary cap has been set at $71.4M; teams may have up to 23 players on their active roster.