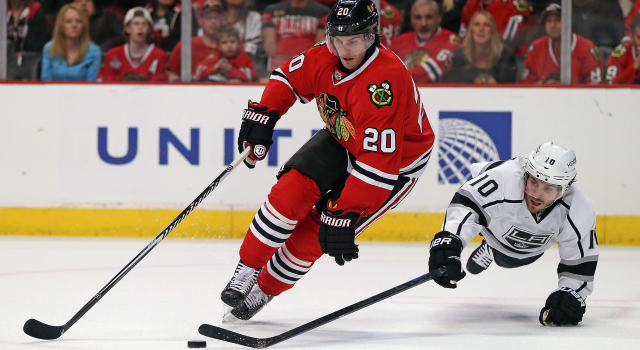 I discussed several of these topics during my appearance on All the Kings Men Podcast yesterday afternoon, but if you weren’t able to listen, the conversation continues here with its own “updates” post.

-MIKE RICHARDS. I’m reading about the speculation of what type of incentive it would take to swap out Richards (and his contract) for crucially needed cap space. In the comments section of this blog and elsewhere, I’ve read hypotheticals of whether the Kings would trade their first round draft pick or one of their well-regarded prospects to be able to entice a team to pick up his contract. As has been stated in the past, this discussion is moot; I’m getting the strong feeling, through multiple channels, that there hasn’t been any clear movement, and no viable suitors have stepped forward at this time. Similar to the attempt to move the center near the trading deadline, there are simply no proposals that make any sense for the Kings as of this writing. Could that change? Sure, it could change. But don’t expect Richards back next year. He’s likely to be moved, either through a trade (which doesn’t appear to be materializing at this point), or via buy-out. Courtesy of War-on-Ice’s new financial tools, should the Kings choose to buy out Richards, this is what he’d count (rounded to the second decimal place) against Los Angeles’ cap:

He’d still collect an actual $1.47M per season from the Kings through 2024-25, should they choose to buy out his contract. Tough decisions lie ahead for Los Angeles, and even though Richards has been paid handsomely in his career and has won two Stanley Cups, a Calder Cup, an Olympic gold medal and a World Juniors gold medal, one can only imagine how this difficult episode has affected the ultracompetitive and popular team-first player.

-FROZEN FURY. Let’s not get too concerned here, but the future of Frozen Fury beyond the fall of 2016 is very much in doubt. All signs point to the NHL expanding (or relocating) to Las Vegas – from one source, the league is not yet ready to announce anything at this point, though we’ll likely get an update following Gary Bettman’s media availability at the NHL Awards next week – and the Kings would not be able to host exhibition games in the market of a rival NHL team. Also, a new arena owned and operated in a joint venture between AEG and MGM Resorts International is under construction on the Las Vegas Strip and scheduled to open in 2016. Prior to the 2013-14 season, the Kings extended their Frozen Fury contract with MGM Grand through the 2016 preseason. Mostly unrelated, but of note: LA Kings Insider will be on hand at both the NHL Awards in Las Vegas and the NHL Draft in Sunrise, Fla. to provide regular and exclusive content.

-MATTIAS NORSTROM. Though LA Kings Insider reported in March that Norstrom “could join the club’s front office as an extension of the development staff,” those discussions did not result in an agreement for the upcoming season. Norstrom holds an executive position with SHL club AIK, and has also helped insure Swedish athletes while serving as a television hockey analyst in his hometown of Stockholm. I’m told there’s still the possibility Norstrom and the Kings could come to an agreement in the future, even if the position the Kings and their former captain hoped to craft together “didn’t quite fit” for this upcoming season. Let’s revisit this story nine months from now.

-KEVIN GRAVEL. As reported by LA Kings Insider on Twitter two days ago (with a stick tap to Paul Bissonnette and those who forwarded a heads up), defensive prospect Kevin Gravel has agreed to a two-year entry-level contract with the Kings that is expected to carry a maximum, $925K cap hit (the paperwork can’t officially be filed until July 1). Gravel, a 2010 fifth round draft pick, was on an AHL contract in 2014-15, his first full professional season after spending four years at St. Cloud State. According to hockey operations, the tall, defensive-minded defenseman showed significant improvement in Manchester this season and will compete for a spot on the Kings at training camp (though in almost all certainty will open the season as a minutes eater on AHL-Ontario’s blue line).

-THE SCHEDULE. It will be released Thursday morning. A reminder: The NHL schedule is not balanced. The Kings will play five games against five Pacific Division teams and four games against one Pacific Division team. Since divisional realignment, the Kings have played the Oilers (2013-14) and Coyotes (2014-15) only four times, so expect Los Angeles to play one fewer game against Anaheim, Calgary, Vancouver or San Jose. Also, because Western Conference teams play in-conference, out-of-division teams three times, whether teams play particular opponents at home twice or on the road twice varies from year to year. Based on the last two years, expect two home games against Colorado, Dallas and Minnesota, and two road games against Chicago, Nashville, St. Louis and Winnipeg.