Kings among the few finalists for Mike Reilly 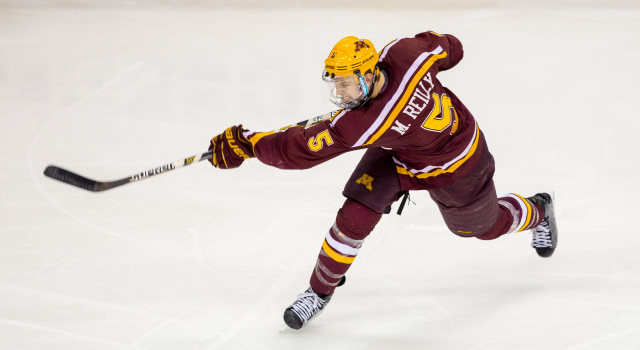 The Los Angeles Kings are among the very small collection of teams remaining in the competition to sign prized collegiate defenseman Mike Reilly, a 2011 fourth round draft pick of Columbus who, according to the Columbus Dispatch, informed the Blue Jackets earlier this week that he would not sign with them.

According to those with knowledge of the negotiations, the remaining teams to be in the forefront for Reilly’s services are the Kings and the Chicago Blackhawks. A third team, the Minnesota Wild, is also likely still in the running, though an additional source believed the competition to be between Los Angeles and Chicago. Reilly has significantly narrowed down his choices, and the Kings haven’t been informed that they are no longer in the running. Reilly’s father, also Mike, is an investor in the Wild’s ownership group.

The 6-foot-1, 182 pound left-shooting defenseman totaled six goals and 42 points in a 36-game junior campaign at the University of Minnesota that resulted in a first team All-American nomination for the second consecutive year and being named as a finalist for the Hobey Baker Award. He represented the United States in both the World Junior Championships and the World Championships, where he won a bronze medal with the United States last month.

Reilly and his camp visited the team’s facility in El Segundo late last week and experienced the Kings’ comprehensive recruiting push, which included depictions of both the on-ice hockey culture and detailed accounts of the lifestyle associated with living as a professional athlete in Southern California.

“We wanted to show him what we had to offer,” Los Angeles Kings Assistant General Manager Rob Blake told LA Kings Insider.

Reilly is represented by family advisor Pat Brisson of CAA, the Los Angeles-based agent who also negotiated last summer’s deals for Patrick Kane and Jonathan Toews. Brisson also represents Anze Kopitar, who is free to negotiate a new contract with the Kings on July 1.

“[Brisson] knows how we operate here, which is a help for us,” said Blake.

Teams are able to offer Reilly maximum two-year entry-level contracts with maximum signing bonuses. Though he may be come to an agreement earlier, he can’t officially sign until July 1.