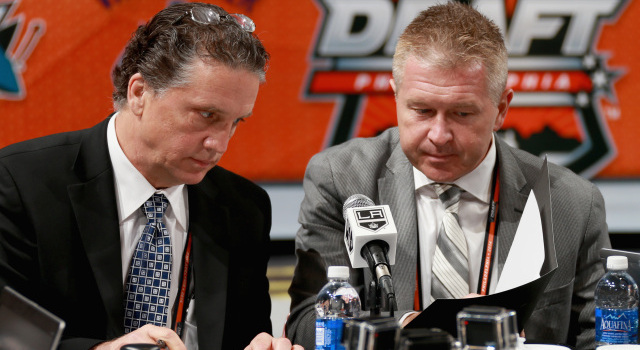 Unless a trade up or down is made – and Dean Lombardi noted that the phone has been ringing – Los Angeles is slotted to pick 13th when the first round of the NHL Draft is held at Sunrise, Florida’s BB&T Center on June 26. The Kings, who haven’t had a top-10 selection since picking fifth overall in 2009, will select fairly high from what is expected to be a deep draft class.

Discussing the team’s draft preparation and the status of Michael Futa, who is a candidate for the Toronto Maple Leafs’ general manager opening, Lombardi expanded on the personnel decisions that will affect the club in the lead-up to late June and beyond.

Dean Lombardi, on Michael Futa:
Mike Futa is still a Los Angeles King and will remain a Los Angeles King. You don’t think the guy could jump ship now, right? [Reporter: Well, there were formal interviews.] … There’s a big challenge ahead of us. I don’t think he’s had time to think about it. He’s been going a hundred miles an hour. He’s at the combine now.

Lombardi, on the NHL Draft and the Kings’ first round focus:
You’re free to talk to Mike [Futa] directly if you’d like. But I will say, 90 percent of the time when you draft an 18-year-old – you hear it time and again – it’s about the best player. I do think in talking to Mike, actually even before I got on this call again, that – I don’t know. I’m not sure where it could go. I’m getting a lot of active proposals to move up, down, move it. So in terms of the player selected, it’ll always be the best player. But in terms of how active we could be with it, I sense there’s a little more – when I finished with the boys, there were here all last week, and they seem to have a lot of juice to look up, down, all around, which means we’ll probably end up doing nothing but picking. But if you want to talk to Mike in detail about the draft, feel free to call him. He’s at the combine right now.

Lombardi, on whether the Kings will try to get a second pick in the first round:
It’s one of the things with the success we’re having in Manchester, that’s one of the things I’ve alluded to. We’re going to have some younger guys battling for jobs here from Manchester. Also, we’re getting people calling about ‘If you don’t want to put him in your lineup, we’ll put him in ours.’ It’s one of the things that happened too, the way that team has performed and the youth of that team down there, it not only bodes well for us getting multiple swings to fill some boxes, but also if it’s too clogged up, they certainly give you the opportunity to pick up extra picks as you’re talking. So that’s probably one thing I haven’t seen in the past, is that there are a number or prospects down there people are calling about and coveting if we don’t see a place for them on our team. They’ve really played well and some guys that you weren’t sure of, they just keep showing up and saying, ‘You know what, give me a shot, man.’ They deserve it. The struggles we had this year, that team down there was like we were the year before. You just feel it, and they’re fun to watch. They’ve got a lot of guys, like I said, that paid their dues and deserve a shot whether it’s here or somewhere else.

Lombardi, on Jordan Weal’s future with the organization:
He just won’t be denied. It’s hard to explain. I’ll give you an example. He’s always fought the size issue as a lot of smaller players have had to do, and they become so driven. He had another solid regular season, but you saw in the playoffs in the first round it was very physical. Phoenix’s team tried to run us out of the building and they were heavy, and the kid was one of the best players out there. He showed he could play in a physical series. In the next series, it was more skill and stuff, and he’s more than fine there even though his space is closing because it’s the playoffs. Again, he just keeps on showing you. ‘Keep doubting me, I dare you.’ It’s almost like he says it every time he gets on the rink. Pretty good.

June 2 Dean Lombardi Conference Call Coverage
Audio: Dean Lombardi conference call | Lombardi breaks down personnel decisions ahead | How do the Kings improve after “We got what we deserved?” | How Lombardi, Kings look to rebound from off-ice issues | “Training wheels are off” for experienced Kings