How do the Kings improve after “we got what we deserved?” 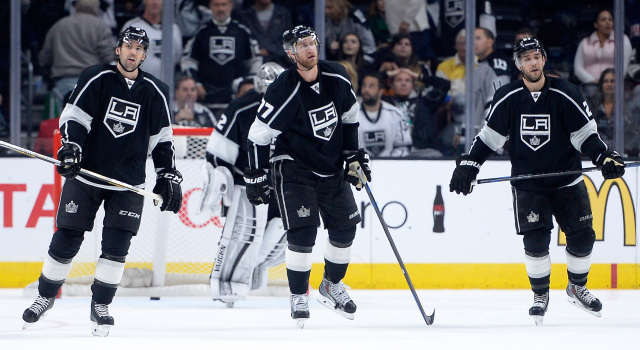 One year ago today, the Los Angeles Kings were recovering from their epic seven-game series with the Chicago Blackhawks and two days away from opening the Stanley Cup Final at home. Two years ago today, they were playing the Blackhawks in Game 2 of the Western Conference Final. Three years ago today, Jeff Carter scored on Martin Brodeur in overtime to ensure that the club would return to Staples Center with a two-nothing series lead.

But June 2, 2015 is 52 days removed from the Kings’ final game of the season, a 4-1 win over San Jose that ended a campaign in which the team won 40 of 82 games. When Dean Lombardi spoke with the media on Tuesday, he spent more time answering a question on how the team has responded to a difficult season in which it failed to qualify for the playoffs for the first time in six years than any other question that was asked.

Now that the team is vying to calculate what went wrong and what can be improved, where exactly is the front office at right now?

“Well, that’s all we’ve been doing. I mean, within five days after that season ended, there was a lot of debriefing that had to take place, and I think that’s where you start,” Lombardi said. “I think it’s also different this year because as you said, not making the playoffs, it’s a very different meeting, the length of the meeting [compared to] when we had it in the past. The coaches prepared a binder that was certainly bigger than we ever got, as it should be, I guess. So you’re debriefing. You start with your players. You meet with the coaches. I think, also, we’ve talked in depth that this is really the first year – you’ve heard me mention this before about the idea that the conditioning and nailing that down because of what had happened in the past. It was more of a recovery-based off-season than upgrading our conditioning. A lot of time was spent on evaluating that, coming up with standards, and we have that opportunity.”

“And then obviously a lot of time was spent with our off-ice issues. We had to face up to what happened there, and it was the same thing – what could we have done to prevent this, and importantly, our approach here in the future to make sure these don’t happen again. So I don’t know – between that, and we started this with the templates and everything else, it’s been pretty much nonstop. And I guess, too, and this is one thing, we’ve taken some hits this year, the one thing that I haven’t seen, nobody’s pointing figures in the wrong direction. The whole goal here is everybody wants to figure out themselves, and let’s go from there. Our players, regardless of what they’ve been through, we’ve never had any of that stuff when we were winning – the ‘I’m better than anybody else’ – we didn’t have any of the pointing fingers when things fell out from under us this year. That’s the one thing that’s been consistent in terms of their approach.”

“I’ve said this, this season we were all struggling to find that certain ‘it’ or whatever you want to call it all year, and when it was over, after Edmonton and Calgary, I think the reality is we got what we deserved, and we have nobody to feel sorry for. Whatever excuse [we had], how does it feel now? Every time we thought we were going to get out of it because we knew how to win or we had been in big games before, well, that didn’t happen. But now we can learn from this. You’ve heard me say this before. If you look at the cores of teams – if you believe in a core of seven players – you’ve got a core that is intact that’s won two Cups, that’s won 10 playoff rounds and their average age is 26.5. This is a marvelous opportunity for a lot of key players and secondary core guys who’ve won and are still together to learn from this and make us better. If this had all happened and our core was averaging 34 years old or something, you’d go, ‘Holy smokes.’ But wait a minute here. Maybe that’s a part of it, too. Maybe having that success with so many young players might’ve been a product here, that handling success can be as difficult as handling failure. Let’s face it, we didn’t handle it. Now we’ve got a marvelous opportunity with this group to learn from it and make us stronger. If we approach it like that, it could be an even stronger group. Only time will tell, and only your players will determine that.”

“I think the first indicator of that is I think our top players have a chance now to become our best conditioned players. I think any great team – and you can look at the Lidstroms, the Yzermans, the Bradys, all those teams, Kobe Bryant – the top players set the mark. It’s not the coach or anybody that gets in their ear. They show up in the top condition, ready to go for a full 82 games. It’s been hard because we’ve been playing until June. Well, this time there’s no excuse. It’s a marvelous opportunity for our top players to take over that room, and they start by doing that, becoming the best they can be, and I think they will. There’s no doubt in my mind what guys like Kopitar and Quick and Doughty stand for, and hopefully this is an awakening. It’s no fun watching the playoffs. In the long run, we could benefit from this.”

Dean Lombardi, on whether he anticipates bigger moves or roster “tinkering”:
I think if you look at our team, I don’t see major moves. You never say never, and I hate to say it, but the truth is now that people are talking more in earnest, I don’t look at anything. It’s asking me to predict, ‘Do I see a major move?’ No. But I could get a phone call five minutes from now that I don’t expect. It’s happened before. But it’s certainly not the priority sitting here that I need to make a big move. … Like I said, those guys are all 25, 26, 27 years old, the big move is taking another step in terms of their preparation and assuming more of a leadership role. That’s the big move. If we do that, we’ll be more than fine no matter what we do.