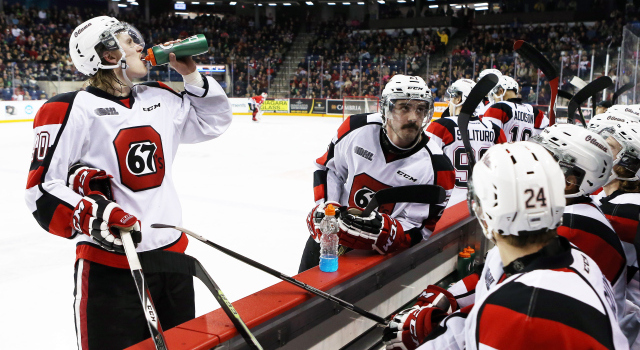 With Adrian Kempe joining Alex Lintuniemi in Manchester for a late-season look and opportunity to train with a team that has already claimed the Macgregor Kilpatrick Trophy, it was time to consult with two great sources of information on where exactly Lintuniemi, Kempe, and several other Kings OHL prospects were at in their development.

I spoke with both Kings Vice President of Hockey Operations and Director of Player Personnel Michael Futa and TSN 1200 reporter and Ottawa 67’s play-by-play broadcaster A.J. Jakubec. The remarks from Futa, who was generous to spend an intermission with LAKI while scouting the U-18 tournament in Switzerland, are above. The entire conversation with Jakubec, who also had good things to say about prospects Spencer Watson, Michael Amadio and Jake Middleton – including Middleton’s ability to grow a really quick mustache (see: above) – was uploaded to Soundcloud and embedded below Futa’s comments. It’s an in-depth, 15-minute conversation on Los Angeles’ OHL prospects, and if you pay attention to the team’s pipeline, you’ll really like it.

Michael Futa, on how Alex Linutniemi improved in his 19-year-old junior season:
Well, we had really challenged him on his fitness level, and he lost about 20 pounds. Obviously he came into camp and had a really good first pro camp with us. I think he made great strides from the rookie camp on to the NHL camp where I think he really impressed. He went back, there were some peaks and valleys to his game. I think at times the junior game isn’t as challenging for him. He’s a big guy. I think he pushes himself a little harder when he’s playing against tougher competition. He went in and he had a really good World Junior Championships with Finland. It was something really good towards his development, being a go-to guy at that level and went back and struggled a little bit after Christmas. I think just getting his head back into it with Ottawa, but he finished really strong. They counted on him and [Jacob] Middleton a lot down the stretch. They had a really big turnaround to their season and he was a big part of that, getting huge minutes and playing in the power play, penalty kill and all different situations we’d wanted him in. At the end of the year, we just felt it was time. It wasn’t really do him much to be sending him back for another year at juniors. It was time to turn him pro with the great year that Manchester was having. We just felt that it would be good to have him down there with that atmosphere, practicing with Stuts, Hajter and the rest of the guys. I guess Schultzy was banged up the other night and he actually got into a game and got an assist in his first game, so everything is positive, but he’s just got a long way to go as far as maintaining that fitness level and building himself up and working on his consistency.

Futa, on the next step they’d like to see Lintuniemi take, should he earn an AHL spot:
It should be again an incredible summer of fitness for him because again, as big as he is, he’s always going to be challenged just to maintain a high level of fitness. It’s one thing to obviously compete against younger kids that he’s just naturally bigger and stronger with. But when he’s going to be challenged against the larger, pro men down there and they’ve got a strong tradition of winning down there right now. It’s not going to be an easy lineup to crack and he’s going to have to push himself so he can go down there and earn the minutes that are going to be necessary to get him to the next level after that. That’s the biggest thing with our team, is it’s not an easy jump and defense is a harder position to learn. He’s shown us that he’s willing to put in the work and again, the maturity level has got to be there. He’s probably going to spend more time with Jeremy Clark again over the summer just getting himself into even better shape. We’re looking forward to it.

Futa, on Adrian Kempe’s North American debut this weekend, and whether any expectations are set aside because of how young Kempe is:
It’s too early for expectations. He’s used to playing against men in the Swedish league, but it’s a different game. It’s a bigger ice surface. It’s probably less physical than what he’s used to seeing jumping right into the last three games of the season, depending on how many minutes they’re going to get him. But he’s a kid where there’s no bar set for what his potential could be. He’s going to have to define the physical game that he brings to the table. He’s shown some nice touch at the men’s league. He’s already an elite skater. But still, he’s a young kid and there’s room for him to grow physically. I think that’s going to be the biggest thing, and I’ve heard that he’s enjoying his time. It’s a different type of game to learn as far as some of the open style that’s played in the Swedish league. But this will be good for him to get his feet wet at this level and especially with the expectations and the great season that Manchester has had, I think again, just being in that atmosphere and being able to push himself and extend his season is only going to benefit us and his development.

A conversation with A.J. Jakubec on Lintumiemi, Middleton and other OHL prospects: