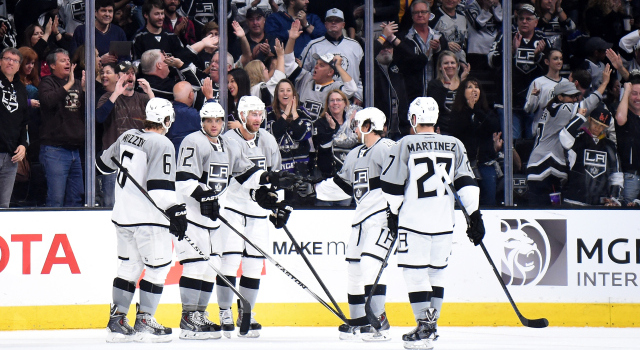 On ending the season with a win:
We talked about it yesterday. We wanted to finish with that, and we did.

On Robyn Regehr announcing his retirement:
Great teammate, that’s for sure.

On his tenure with the club, and this season:
You know what? It’s incomplete this year. It feels today like it did when we lost the conference finals, and that’s the standard, sort of a bar that you set. When we won the Cup and we lost in the conference finals, it’s just like not making the playoffs. And then we won the Cup and this year we didn’t make the playoffs. It’s the very same. Our record ends up being this year an identical record to the first Cup year, which tells you that – so what’d we finish in this new division and the new format? This year we finished fourth and ninth? That year we finished third and eighth with the identical record and new format. That record is not good enough to be a playoff team. It’s not good enough to win a championship.

On whether “we’re going to see you in September”:
Absolutely. What do you mean, ‘see me?’ Am I invisible?

On how he’d summarize the season:
Obviously we had a great, great home record. It was one of the best records in the history in the franchise. I think the road record, you’re going to break it down and you’re going to see a pretty good idea. You’re going to break it down into the two or three long trips and what you got out of it, which wasn’t enough, and you’re going to break it down in back-to-back games during the season, what we got out of it, and we didn’t get enough out of either one of those, and that’s a reflection a little bit of the long haul, a little bit, because that is the attrition of it, when you get into those long parts of the year. I think I saw that with our group a little bit, and I also saw a lot of our younger players, maybe, we have a lot of guys by position who are young guys that even though they might’ve won one or two cups – one or two, or not at all – I think that they probably didn’t get enough out of that experience, and I think this year that experience for them will make them better players.

On receiving a standing ovation at the end of the game:
It was a big part of wanting to win today. I talked to the players about that yesterday. There’s not much to talk about after a game. We talked about it before the game. It’s important that we won two championships in this building in front of most of these people, and you want to do that again. And if we could turn around and did that back, we would’ve.

On when next season begins for him:
I really haven’t – it’s like I told the coaches. I wanted to focus on today today. In a game today, that’s my responsibility to the players and the staff to do that today, and then I told ‘em tonight there were some other things I wanted to break down tonight, and I’ll meet with the coaches tomorrow, and we’ll start working on it.

On Robyn Regehr:
Obviously I have a really personal relationship with Robyn. He’s been a Los Angeles King for what- [Reporter: Three.] Not even, when he came here. Him and I go back a long ways. We lost a Game 7 Stanley Cup with Calgary, so to get him here and to be able to win one here is awesome. He’s not only a good player, he’s a great person, and the best thing about when we got Robyn here was there’s a lot of young defensemen here, and if you look at their seasons, they’re going to learn a lot from Robyn Regehr, all those young players. Robyn and Greener are the quarterbacks back there in the locker room and in terms of professionalism, and every one of those other guys, they’re going to miss Robyn. They’re going to have to take a step forward now.