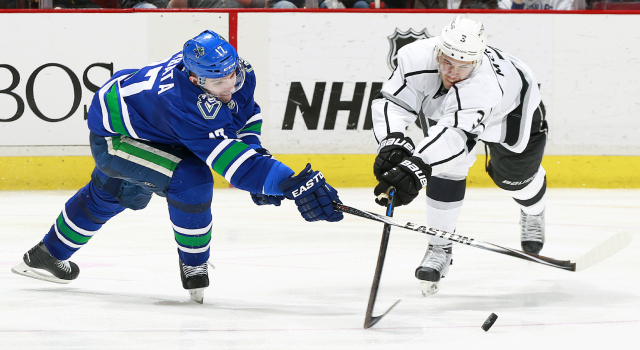 Darryl Sutter liked the Kings’ performance overall in Saturday’s 4-1 loss to the Wild – they registered 59 five-on-five shot attempts at even strength to Minnesota’s 30 – though there were some aspects of the game that weren’t as even as others. He particularly liked Jeff Carter’s line.

“They were very effective,” he said. “I’ve said it lots, right? You need everybody every shift to make the playoffs. Kopi’s line was a little off last night. Basically, all it is is Koivu’s line – three big players – dominated the game.”

And while the Kings are still fighting to get into the playoffs, and while Minnesota has risen past the wild-card fray into a divisional playoff berth for the time being (and perhaps longer), Sutter crossed one particular landing point off the postseason itinerary.

“Everybody’s trying to make the playoffs,” he said while rejecting an allusion that the team would face another “desperate” team in the Chicago Blackhawks on Monday. “We still have the opportunity to get home ice, as ‘desperate’ as we are. We still have the opportunity to go home in two weeks, so it’s one of the two. You’re not going to get a wild-card spot. The wild-card’s out of the picture.”

Statistically, the Kings have a greater probability of finishing in second place (18%), third place (43%), or as the first team out (23%) than finishing as the second wild-card, even if the Jets, who currently hold the second wild-card and own a two-point advantage over the Kings, have a more difficult schedule. The percentages, provided by SportsClubStats.com, say that L.A. opened Sunday with a 69.7% chance of making the playoffs.

Little will get accomplished weighing potential scenarios well in advance of the final weekend of the season – or at least until the Kings finish their head-to-head battles with the Canucks and Flames. Los Angeles plays in Vancouver on April 6 and in Calgary on April 9.

“If you look at last night, we played the Minnesota Wild, and I said it earlier in the year, the Minnesota Wild are as good a team as there is in hockey. You know what? You’ve got to get into that division part of it. That’s the structure of the playoffs, and that’s where you’re at.”

The Kings, Flames, Canucks and Jets each have seven games remaining:

Darryl Sutter, on Alec Martinez and Mike Richards’ returns to the lineup:
I thought Marty was really good his first game back, and he wasn’t as good in the second game and he was better as it’s gone along here. Mike is still important. You need four lines. If we don’t have four lines, for example, if tomorrow’s the only game that you’ll ever play again, if you don’t have four lines, and that’s the last game we ever play, we’ll get beat. So you need four lines. Every good team has four lines, even the team we played last night. It’s really important.