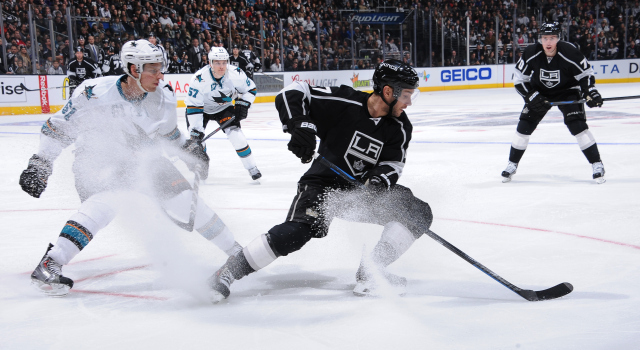 Alec Martinez underwent a thorough on-ice conditioning and puck-handling session with Associate Coach John Stevens at Toyota Sports Center today as he strives to return from concussion-like symptoms that have kept him out of the lineup since he absorbed a heavy hit from Tampa Bay’s Cedric Paquette in a 4-2 Kings win at Amalie Arena on February 7.

Martinez took the ice shortly after 11:45 a.m. and remained on the ice for just shy of one hour as he took part in skating, puck-handling and shooting drills that appeared to represent a step forward in pace and urgency from earlier on-ice sessions.

The next step in Martinez’s recovery would be for him to practice with the team. At this point, it is unclear whether that will happen this weekend, though through conversations with hockey operations it is becoming likely that his on-ice reunion with the team is something that will happen soon. The decision of when he ultimately rejoins the team on the ice is a decision that will ultimately be made by Darryl Sutter.

Tanner Pearson is also making progress as he skates every other day at Toyota Sports Center in his attempt to return from a broken lower fibula suffered during a 5-4 shootout loss to Winnipeg on January 10. Based on conversations with hockey operations, Pearson’s X-rays look good, and his projected recovery time – estimated at three-plus months – remains accurate.

The club has also opened up preliminary discussions with Pearson’s agent in an attempt to sign the 22-year-old to a new contract. Pearson is bound for restricted free agency, though the club does not foresee any challenges in coming to an agreement on an extension.

In terms of a sequence, the agreement with Pearson is expected to be the next contract to be finalized amongst the club’s restricted free agents, followed by goaltender Martin Jones. The process of coming to terms with Tyler Toffoli on a new contract will take longer. Andy Andreoff and Nick Shore are also impending restricted free agents, while Justin Williams, Jarret Stoll, Robyn Regehr, Jamie McBain and Andrej Sekera are eligible for unrestricted free agency on July 1.

Based on financial information that was available when CapGeek.com was operational, Los Angeles has roughly $62.75 million allotted to 16 players for the 2015-16 season, a figure that includes both Mike Richards’ and Slava Voynov’s contracts; next year’s salary cap isn’t expected to rise much farther than $69M, if it rises at all.