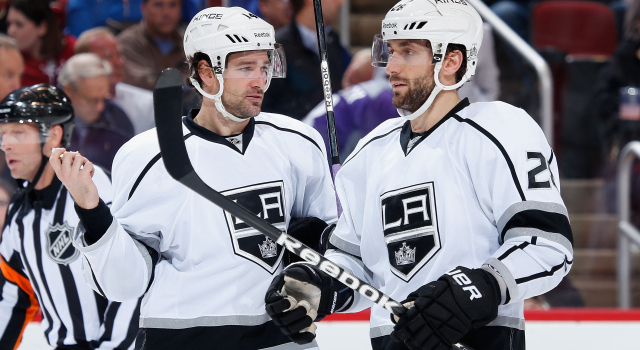 Good morning from Toyota Sports Center. Notes from today’s skate will follow, but if you’re looking for something to quell your Thursday morning hockey appetite, here’s my previously teased LAKings.com story on the team’s push to protect its own players and not trade away from its core. It’s called Cup Continuity.

Via LAKings.com:
The Kings have had an aversion to subtracting from their core – or, as Dean Lombardi has said before, “pulling guys out of that room.” The continuity has been an asset in establishing a culture of winning within an organization that was prone to trading first round draft picks throughout much of its adolescence.

“I think when you win, that helps. If you’re not successful as a team, then there are going to be changes,” Jarret Stoll said. “We see that with every team, especially in this league, that it’s a short memory. You’ve got to win and you’ve got to win now. We’ve been fortunate enough and played well enough to keep this core group together and management has done a great job of letting that happen. In this era, it can be tough to do sometimes.”

More to come from El Segundo…