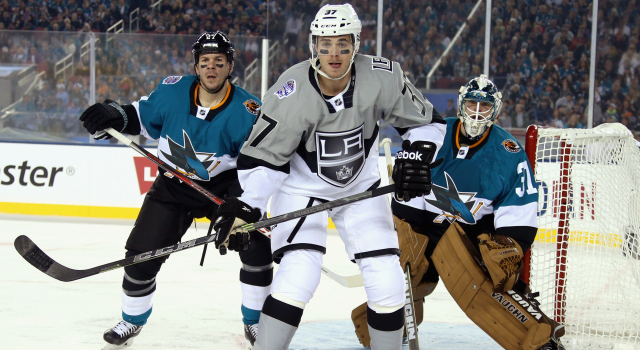 Several odds and ends related to the Kings, the trade deadline and free agency:

-There were no serious trade discussions the Kings had with any team following the Andrej Sekera trade.

Having lost Willie Mitchell to free agency and Slava Voynov to an indefinite league-imposed suspension, Los Angeles identified early in the season that the blue line was the clear area that would benefit most from an upgrade. The club looked at both right and left-handed shooters, and the familiarity with Sekera made him the chief target. When Sekera played at OHL-Owen Sound, VP of Hockey Operations and Director of Player Personnel Mike Futa was the general manager and Monarchs head coach Mike Stothers was the the Attack’s head coach.

“That stuff checked out on him,” said Assistant General Manager Rob Blake, who was among those commending Sekera for his approach and character. At no point were the Kings targeting a center in the lead-up to the trading deadline.

As for discussions over Mike Richards, there was no chatter that differentiated from the types of conversations that the team had prior to his assignment to Manchester.

“There was nothing that ever made any sense to the situation,” Blake said.

There’s a good chance that Richards re-joins the Kings later in the season as the team continues its playoff push; we’re still a little ways from that becoming an imminent possibility.

-Tough decisions on free agents-to-be lie ahead, as you are well aware. Tanner Pearson, Tyler Toffoli, Martin Jones, Andy Andreoff and Nick Shore are bound for restricted free agency, while Jarret Stoll, Justin Williams, Robyn Regehr, Andrej Sekera and Jamie McBain are due to become unrestricted free agents if they don’t receive new contracts. Based on financial information that was available when CapGeek.com was operational, Los Angeles has roughly $62.75 million allotted to 16 players for the 2015-16 season, a figure that includes both Mike Richards’ and Slava Voynov’s contracts; next year’s salary cap isn’t expected to rise much farther than $69M, if at all. So, as has been explained many times previously, difficult decisions lie ahead.

As for the restricted free agents, I’ve been told by hockey operations that the Pearson and Jones contracts are likely to be the next two to fall, and that Toffoli’s next contract is expected to take a bit longer to be finalized. There doesn’t appear to be a concern in regards to negotiations with Toffoli; as noted, from my understanding it’s just going to take a little bit longer. The team’s focus has been handling its own players before looking elsewhere, hence the recent extensions signed by Jordan Nolan and Kyle Clifford.

-Nick Shore was involved in a minor “paper trail” transaction yesterday that will make him eligible for the AHL playoffs, should he be needed in Manchester. The team assigned Shore to the Monarchs before immediately recalling him; this type of transaction is fairly common for waiver ineligible players. The transaction took place last year (though over a wider time frame) when Martin Jones and Tyler Toffoli were assigned to Manchester during the Olympic break.

Per the CBA, teams are allowed four recalls after the trading deadline, and Shore’s paper trail assignment constituted one of them.