Clifford extended; “It’s where I want to be. We’re a family” 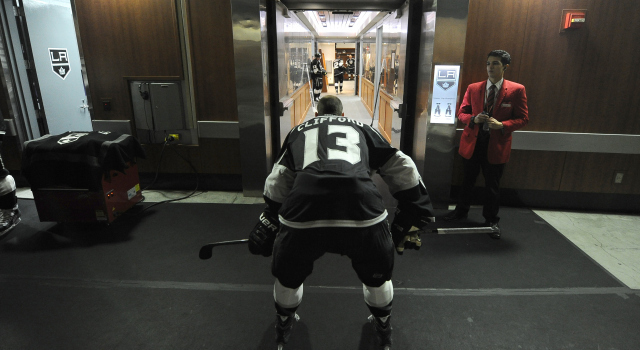 The Los Angeles Kings announced Wednesday morning that Kyle Clifford has signed a five-year contract extension that will run through the 2019-20 season. Via Elliotte Friedman of Hockey Night in Canada, the average annual value of the contract is $1.6M. The 24-year-old’s two year contract that carries a $1.075M cap hit will expire on July 1; the forward was bound for restricted free agency.

“It’s a good feeling,” Clifford said. “Obviously you can get it out of the way and just focus on hockey. It doesn’t guarantee anything. You still have to come to the rink every day and put your work in and continue to progress to win games.”

Contract negotiations began after the All-Star break, according to Clifford. The process took slightly longer than the efforts to re-sign Jordan Nolan, whose negotiations took place over a shorter time frame before his signing was announced Tuesday.

“No, the first couple weeks were real slow,” Clifford said. “We had a long road trip there. But it’s done, so the last couple of days have just been moving quick.”

Clifford, who fought, clawed and scraped his way onto the team as a 19-year-old in 2010-11, is a five-year veteran who has mostly remained healthy despite his demanding style of play and has already amassed 333 games played out of a possible 353 to begin his career. It’s almost strange to think of him as someone approaching veteran status at his young age.

“It’s come quick, but it’s been a lot of fun and I’m just looking forward to continuing that fun,” he said.

The signing does raise questions about whether the Kings will have enough space remaining to re-sign unrestricted free agents Justin Williams and Jarret Stoll, given that Tyler Toffoli and Tanner Pearson are bound for restricted free agency. With Clifford’s signing, Los Angeles has allotted approximately $62.75M to 16 players for the 2015-16 season (based on financial information provided when website CapGeek.com was operational), with Williams, Stoll, Robyn Regehr and Jamie McBain eligible for unrestricted free agency and Toffoli, Pearson, Martin Jones, Nick Shore and Andy Andreoff eligible for restricted free agency. As has been reported continuously, there is a question towards how much the salary cap will rise from this year’s $69M ceiling because of a weak Canadian dollar that has shown signs of life this week.

Clifford, a two-time Stanley Cup winner who drew into only three games in the 2012 Stanley Cup Playoffs due to injury, appeared in 24 of 26 playoff games a year ago and played through a fractured bone in his wrist that required off-season surgery.

“I think…in any career there are always ups and downs. I think a big focus with myself and with our group here is we’re just trying to focus on consistency and taking care of that part of it and coming in every day and doing what we need to do,” he said.

“It’s where I want to be. We’re a family. We all want to be here. There are 23 guys that, we bleed for each other, we love each other and that’s what makes it fun.”