Nolan happy to be recognized with three-year extension 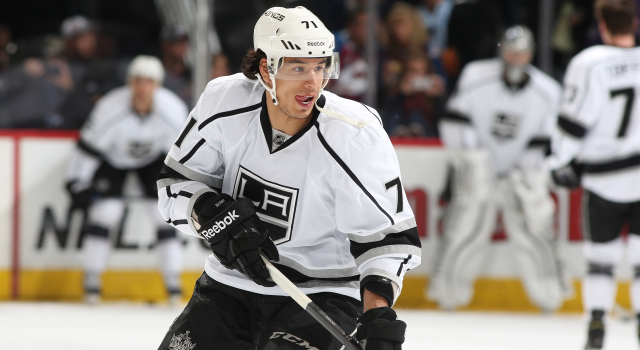 Jordan Nolan has an agent, though it’s not a bad thing to rely on the advice of a close family advisor.

In this case, the advisor was his father, Buffalo Sabres head coach Ted Nolan.

“I called him a few days ago and we were going to talk about contracts, and I think we originally talked about two years and he said try to get that third year,” Jordan Nolan said. “So we did and it seemed to work out.”

“He’s always in my ear a little bit,” the rugged Kings forward continued. “He’s very happy for me.”

A happy dad – and a savvy negotiator. The Kings announced earlier today that Nolan had been signed to a three-year contract extension.

By extending Nolan to a contract that has a $950K average annual value, per Bob McKenzie of TSN, the Kings checked one of their to-do items off a laundry list of player personnel decisions. Justin Williams is an unrestricted free agent. So are Jarret Stoll, Robyn Regehr and Jamie McBain. Tanner Pearson, Tyler Toffoli, Kyle Clifford, Nick Shore, Andy Andreoff, Martin Jones and Jordan Weal are all restricted free agents. Because the club has allotted roughly 61.15 million to 15 players next season, tough decisions lay ahead for a team that will be able to spend in the ballpark of eight-to-12 million dollars to fill out a maximum 23-man roster, barring the very real possibility of trades to clear up cap space.

Nolan, meanwhile, has seen his role evolve this season, and he’s no longer among the more willing combatants around the Pacific Division. Entering the year having averaged one fight for every 9.5 career regular season games, he has fought once this year, a bout with New Jersey’s Mark Fraser in January. Instead, Kyle Clifford, who has totaled eight fights in 2014-15, Brayden McNabb, Andy Andreoff and Matt Greene have all logged more on-ice bouts than Nolan.

That’s not particularly important, and the role of the “enforcer” is not what the same as it has been in earlier eras. Nolan, instead, is tasked with playing his role: providing energy and taking care of some of the edgier, physical aspects of the team’s game.

“He’s got to get involved, he better get involved, and the other team better know it,” Darryl Sutter said after today’s morning skate.

Nolan has done a better job of getting involved recently, and that has been a byproduct of a widened opportunity due to Tanner Pearson’s injury and Mike Richards’ assignment to Manchester. He’s slated to play his 18th consecutive game tonight and is in the midst of his third longest stretch of consecutive games played in the NHL, trailing the streaks of 26 consecutive games he logged during the 2012-13 season and the 20 consecutive games logged in 2013-14.

“I think I’m just slowly getting my confidence up, slowly believing that I can make plays and score goals and play that physical as the team needs,” Nolan said. “But lately, I’ve been feeling good and trying to do more for the team and it’s working out so far.”

That it has. His play picked up at the start of the Kings’ six-game road trip two weeks ago, when he scored a goal and was strong on the puck as part of a season-high 13:12 of ice time in the 3-1 loss at Boston. Three of Nolan’s four goals have come over the last 10 games.

The chemistry he has etched out with Nick Shore and Kyle Clifford came bursting to a head during the Stadium Series game as all three forwards significantly outplayed those they took the ice against. The secondary scoring has relieved the top players of their scoring burden and balanced out the Kings’ attack, freeing the team to average 3.57 goals per game over its seven-game winning streak.

“It’s just nice to feel wanted,” Nolan said of his extension. “I put a lot of time and effort into the organization and won some Stanley Cups. To be wanted here for a few more years feels nice.”

Jordan Nolan, on whether he is playing with more confidence:
Definitely, anytime you get put back into the lineup you want to do your best. You want to perform. With Pears being out, it gives me a chance to step in and show that I belong and I can play every night.

Nolan, on whether the team’s more disciplined play is helping him:
Definitely, we’re rolling four lines right now. Shoresie is playing well with me and Cliffy and we’re starting to build some chemistry, so we’ll keep it going tonight.

Nolan, on what Nick Shore and Kyle Clifford do to allow their line to have success:
We all do something a little different. Cliffy is tough to play against out there. He gets the pucks in deep, he gets them back. Shoresie is one of the smartest guys on the ice, tearing up the American League coming up here and kind of finding his way right now. So I think we’re starting to jell.

Nolan, on when he felt that the sides were close on a contract extension:
My agent called me a few days ago and said you maybe have the opportunity to take care of some paper work and get you locked up for a few years. I said ‘alright, sounds good.’ Two days later, I got the call and said we were all set.

Nolan, on whether this was among the easier contracts he has signed:
I mean there are no easy contracts, but it was definitely a lot quicker than the first one I got.

Nolan, on whether members of his line are hitting their stride at the same time:
It’s been good. Shore is still a young kid in this league. He’s still trying to find his way in this league. Me and Cliffy too, we’re still young guys. We’re still trying to work hard and stay in the lineup, but Shoresie is an extremely smart player and Cliffy gets in there and, for myself, I’m also just trying to work hard, play physical and score a few goals here and there.

Nolan, on whether he has resumed his energy role over the last few weeks:
I think so. I think it’s hard coming into the lineup start of the season, and then with Pears being out it kind of gives me an opportunity to step in for the team and show that I belong in the lineup.

Nolan, on what the team does at this time of year to pick up points in the standings:
I think it’s just the excitement for playoff hockey. The season is a lot of fun, but it’s nothing like playing in the playoffs and battling for the Stanley Cup every night. So we didn’t want to miss that opportunity to get in there.

Nolan, on the Detroit Red Wings:
They’re one of the most skilled hockey teams in the league. The first time we were in there at the start of the season, they moved the puck well and they jumped on us pretty quick. So we’re going to have our hands full tonight.