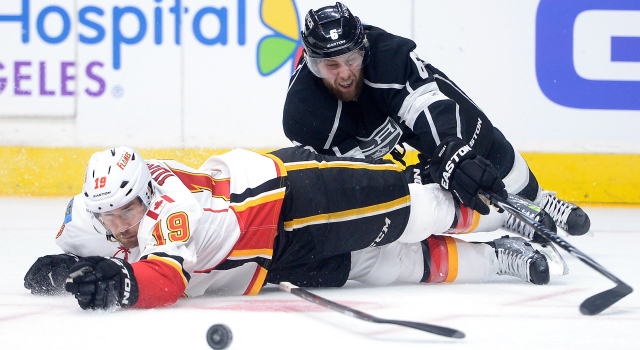 Yes, those same pesky Flames who have twice exited Staples Center with overtime wins in games they never led during the run of play. Those games, combined with Calgary’s 2-1 home win over Los Angeles on December 29, tell us that the Kings have led for 60:07 of the season series, and the Flames have led for 47:47.

And yet the Kings, who are five points below the Flames in the standings with a game in hand, are looking to win their first game in four tries against their former Smythe and current Pacific Division rivals.

“I guess you can look at that the other way, we’re 0-1-2 against. It’s not 0-3,” Justin Williams said. “Calgary has played us well and obviously they’ve given themselves a lot of respect right now with the way they’ve played throughout the first 50 games of the season. They’re sitting second in our conference. We better wake up to the fact that it’s a challenge and they’re a great team and we have to bring our best to beat them.”

The urgency is certainly there.

“Game 7, must win,” Jake Muzzin said. He emphasized the “must-win” designation, and considering SportsClubStats.com gave the team a 39.6% chance of making the playoffs prior to Wednesday night’s games around the league, he’s not speaking in hyperbole.

“I think going forward here, every game is going to be important with the position we’re in and what we need to do,” he said. “Every game is important, so you take it one game at a time and go from there.”

Anze Kopitar said that he didn’t get to know Johnny Gaudreau too well over All-Star Weekend because they were on opposing teams. He’s much more familiar with Calgary’s back end.

“I think their defense corps is really good,” Kopitar said. “I don’t know if Giordano is still on top points wise, but he’s done some damage against us too, and [so has] their D, so we have to make sure that we limit that and make it hard on them.”

Justin Williams, on Calgary’s identity:
I think a team creates its own identity in how they play and I think they’re just a very mobile team and very opportunistic on rush chances. They have D joining in and our able to create a lot from that. It seems against Calgary you have to skate just as hard forwards as you have to do backwards and that’s hard to do.

Jake Muzzin, on the challenges Calgary provides:
I know the one here before Christmas, we let up late and they capitalized and ended up winning in overtime. Just playing a full 60 against this club, from the puck drop and not staring in the third period when we’re down. So that’s key for us.

Anze Kopitar, on whether Calgary’s style of play is comparable to Chicago’s:
It’s a fast game, yeah. They’re not the biggest team by any means, but they can play fast. You definitely don’t want to trade chances with them because they also have a lot of firepower up front that can hurt you in a hurry.