Later today the Los Angeles Kings will introduce new logos and jerseys that their AHL affiliate will wear next year when it is located in Ontario, California, roughly an hour east of Los Angeles (if you take the 210 and avoid traffic, of course).

A main reason for moving their highest affiliate – along with the desire to grow the game regionally – will be to ease the cross-country burden and to speed up travel time during roster moves. If you’re looking for a case study on why this will be important for the Kings, consider the travel challenges weathered by defenseman Derek Forbort, who was officially summoned from AHL-Manchester earlier today.

“I got in late last night,” Forbort said this morning. “I got delayed in Manchester a little bit, so I got in around midnight.”

Even when he was able to complete his travel, there was still a delay. He wasn’t as lucky on Monday when he attempted to meet the team in Columbus during a heavy snowstorm in the northeast.

“I was in Boston, sitting on the plane for about an hour and a half,” he said. “We were on the runway waiting for the snow to let up, and it never did, so I had to go back to Manchester for the day.”

“We get a blizzard every Monday,” the Duluth, Minn. native said. “We literally have about, I think, like six or seven feet of snow. We get it by the foot every Monday, it seems like.”

His flight never left Boston on Monday, so his recall didn’t officially take place until today. Of course, this meant that he learned from a pilot that one of his life goals would have to be delayed by at least 24 additional hours.

“I was about to drive,” Forbort joked. “It sucked, but there’s nothing they could do about it.”

The Kings have been patient with the 6-foot-4, 219-pound defenseman who was selected 15th overall when the club hosted the NHL Draft at Staples Center in 2010. After three full years at the University of North Dakota, he turned pro in the spring of 2013 and has since incubated himself in the Kings’ development system for 126 AHL games.

“He’s not unlike any other young player who comes out of college or junior,” Darryl Sutter said. “Unless you’re somebody who jumps into the lineup as a high-first round pick, it usually takes two or three years.”

Hockey operations also discussed the evolution in Forbort’s assertiveness and leadership both with LA Kings Insider and LAKings.com, and it goes hand in hand with the defenseman’s own self-evaluation. When asked about what has helped facilitate his development, he answered, “my practice habits.”

“I’m just making every rep count, and I think that’s what kind of led to my game growth, and my level of play increasing over the last couple years. Just trying to work my hardest every day,” he said.

Forbort fits the mold of a more modern NHL defenseman. He has good size, yet it’s his skating and mobility that stick out amongst his complete package. It’s a skill set that has come together amidst the grind and more compacted professional practice and game schedule.

“I think just my overall compete,” Forbort said of where he has most fully developed since he was drafted. “Being hard to play against and being tough to play against in the D-zone and being responsible, and then the next step is making that play and getting forwards going the other way. I feel I’ve done a lot better job this year of doing that than maybe last year or in college.”

It has led to being summoned to Los Angeles, where the temperatures this week sharply opposed the wintry conditions he left behind.

“I put on jeans and a long-sleeve and I was like, ‘Wow, I’m a little overdressed,’” he said.

Derek Forbort, on having his call-up delayed by weather:
It sucked. I was pretty excited about the call in the morning. Things like that happen, though, so hopefully I get another chance.

Forbort, on getting called up:
I’m just trying to take it all and work really hard out there and just compete.

Forbort, on whether he realized he’d be considered for a call-up:
You never really know when it’s going to come. You’ve just got to stay mentally ready. When (Monarchs Director of Hockey Operations) Hubie McDonough gave me that call, it was a pretty exciting feeling.

Forbort, on whether it’s easy to remain patient given the organization’s avoidance of rushing players:
I mean, it gets a little tough at times, but a lot of guys here have gone through that, so you know it’s just kind of what you have to do. I’m willing to put in that time…to develop and be a good NHL player. 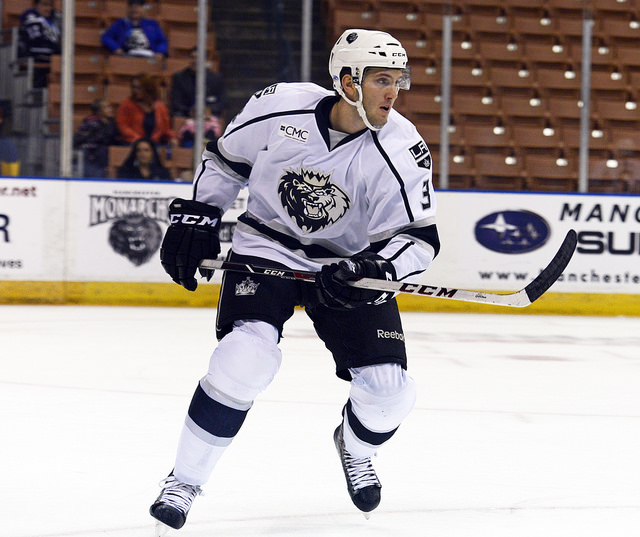