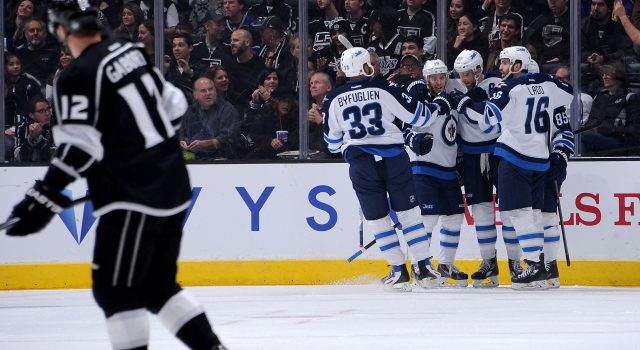 The Kings practiced at Amalie Arena in Tampa Bay on Friday, less than 24 hours after a loss to the Florida Panthers kept them five points out of the Western Conference’s final wild card spot with an additional calendar day leading up to the April 11 season finale removed from the schedule.

On the surface, the Kings appeared to be in adequate spirits despite the drop-off in the standings. They’re aware of the situation they’re in. They’re frustrated, even if they aren’t always demonstratively so when speaking with reporters during off-day practice sessions.

But deeper down, given the seven wins in 25 games during the dog days of what was supposed to be a legitimate defense to their second title in three years, there’s clearly a simmering umbrage towards the season’s direction in what has been a cruel calendar year of 2015.

“I hear you people say it all the time,” General Manager Dean Lombardi said. “You don’t even have to be the general manager or coach to get a feel for a room, right? And you guys have been around long enough, and you can sense it. It’s weird. But you know what? It’s not weird, because 50 years from now with these brain scans and understanding of neutrinos, we’re going to find out that there is a scientific basis for that innate feeling we get that we can’t explain.”

Neutrinos aside, that innate feeling has been with Lombardi for a long time – even since the club’s six-game winning streak in October.

“Let’s get real here, this has been going on all year,” he said. “We’d show signs, like Chicago we played well. We played well in Boston, and it looks like we’re coming, and then we get this. This has been a year-long thing. This whole ‘flick switch’ thing is the kiss of death if you look at history. The only difference now is you’re in February, right, but in reality you’re seeing the same things.”

The “flick switch” – a reference the club hears over and over again from those on the outside who look at the team’s championships that have followed standout if not exactly Presidents’ Trophy-caliber seasons and assume they’re capable of “flipping a switch” come playoff time – makes many in hockey operations bristle.

Nor does the theory that the team is worn down given the amount of hockey that it has played in the previous three seasons necessarily sit well with Lombardi. That’s not to say that the hypothesis is flawed, but rather that it can’t really be repeatedly tested.

“The answer doesn’t lend itself to a formula. It’s that feel part of the job,” Lombardi said. “What you’re saying is, whether it’s right or wrong, will anybody ever know? At least the premise has some credit, has some credibility. But you would still hate to think that at some point here, an athlete – I don’t care where he’s been – it’s like, was Jordan ever satisfied with three, four…? I guess that’s the counter-argument to that, that they get to this level because they’re great competitors and they never want to be embarrassed, regardless. He could have five rings and you don’t want to be embarrassed. So that would be the counter-argument to [that premise].”

“But then you’ve got the thing, is it physically possible? You’ve got a mental thing, right? Clearly that’s part of it. Your question lends itself to, is it possible to recoup over two months and then retrain?”

Using the context of Thursday’s loss, Darryl Sutter challenged the thought that mental blocks could be significantly impairing the direction of a team that has played games in June in each of the last three seasons.

“We have a good understanding of where we’re at, and then how hard it is to make the playoffs,” he said. “I think we’ve got past all the other stuff, but we’re in a position where it’s going to be tough. We know that. We thought we played really well last night, and that’s what we want to do tomorrow. After the game last night, when you guys asked, hey, we made two critical errors that cost us a hockey game. Those guys can not make those mistakes. If you make mistakes, you’re going to lose games, and that cost us a game last night.”