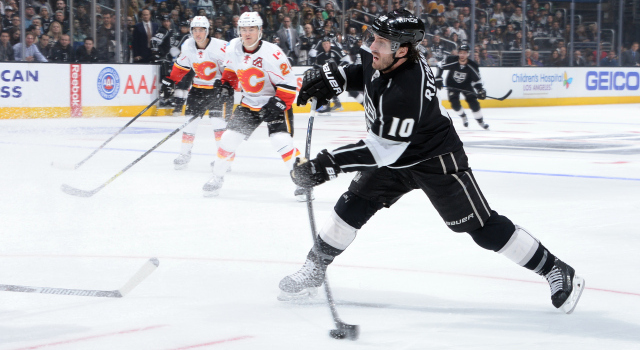 Dean Lombardi, on when it became clear that Mike Richards would be placed on waivers, and that a trade wasn’t as likely:
I don’t think it’s one point. It’s a process you work through, right? It’s not like it all of a sudden dawns on you. I mean, you’re starting to think about it and you work through the process. I mean, I think it’s fair to say that we made a final decision on this that we were going to one way or another deal with it after the All-Star break.

Lombardi, on how Richards took the news:
You can ask him. The process isn’t done, obviously, because you’ve still got to clear. We’ll talk a little more tomorrow. I’m sure it’s not easy on anybody, but these are the tough decisions you’ve got to make.

Lombardi, on whether he hoped the discussion over a potential buy-out could “get him going” as part of a “second chance”:
I think it was a combination of that. We expect loyalty from our players, and I think it’s a two-way street, and I think under the circumstances, what he had done for us, I thought he deserved a chance to get back to what he knows he was capable of. That’s a hard balance, and obviously I’ve thought about that a lot. There’s a new wave thing out there, that players are commodities, and things like passion and loyalty – those values that I thought made sports so special – the commodities guys will tell you they don’t matter. Well, it’s been a big part of the success of this team, I certainly believe. And that’s kind of the way that I came down on it, that if you’re going to expect loyalties from your players, you have to, at times, show loyalties to them. Then the issue becomes ‘Where’s that line?’ And I step back now. I’m never going to lose my belief in those values being critical, but I think as we see in the cap era, the cap is actually designed a lot of times – the function is to eliminate those type of emotions, and unfortunately I still think believe they’re still a critical part of a good team. Even in retrospect – if you use the commodities angle – you say, ‘Well, it should’ve been easy.’ If you use the belief in the intangibles, then it’s not. It is what it is. But in the end, I felt he deserved that chance for all he had done for us. I don’t think there’s any question we don’t win that first Cup without what he did for this team, and obviously, we don’t win the second one. But there’s still got to be a certain level here that has to get done.

Lombardi, on how today’s decision could affect free agency negotiations:
Well, that’s the thing we’ve got to work through now. The way I look at this, Mike’s, in his career, he’s shown he can be a .330 hitter and get you 80 RBIs as an All-Star player. So, maybe at this stage, maybe it’s not there. But I still assume he’s capable of being a .280 hitter and doing a lot of those things for you that only he can do. Let’s face it – right now he’s batting .200, but I don’t see any reason why he can’t get back to that. He’s got to do what he’s got to do. The only analogy too, you can come up [with] – there’s a lot things that I saw that reminded of where Teemu Selanne was at this stage. I remember when he had fallen off the map, it looked like, in Colorado. It looked like he was done, and then he started changing some things and then went on to two great 10 years, for crying out loud. It’s up to Mike. There’s no [doubt] in my mind, I believe that if he wants to, that he can get back to that. But it’s going to be up to him.

Lombardi, on the impact within the Kings’ room:
There’s always a concern, because…in the end, it’s them getting it done. But, face it, these decisions are all made for the team, quite frankly.