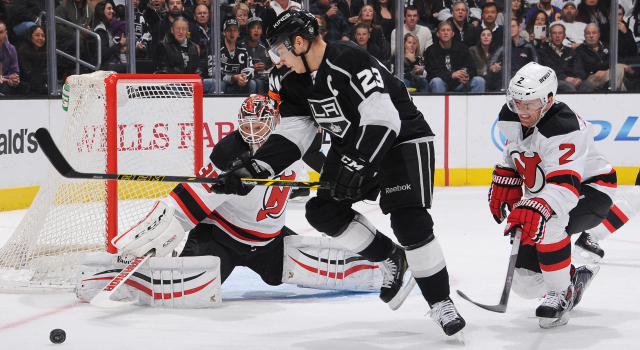 On the challenges presented in the 5-3 loss to New Jersey:
I thought our penalty killing was just draining us. It takes so much out of your team. They scored the goal at the end of the first and then you come back and score and give then give it up right away. It’s really disappointing. [Reporter: How do you fix that?] Just continue to work at it, but at the same time you have to have a great desire to do it and you have to break down who’s always on the ice for them…[inaudible]…[Reporter: Especially after that beautiful goal, that Doughty sets it up, and then to have three straight-] You can’t trade chances. It doesn’t matter. Those look nice. That doesn’t matter. You don’t get anything extra for beautiful. In fact, they got the points tonight from right around the net.

On goals off skates, and whether bad luck affected the momentum:
No. Sometimes luck is a little bit about work, too.

On the goals against in bunches:
That’s three in a minute, but at the same time you’ve got to be able to have the focus to play through that a little bit. I wouldn’t say they’re great goals, I wouldn’t say they’re lucky goals. I’ve been saying that – I mean, if you give up five goals you can’t say that two are lucky goals. You give up five, you’re going to get beat. I’ve said that. I said if you give up four, you’re going to get beat. That’s real.

On the goaltending:
We played Marty again because he’s coming off the shutout and he was really solid, and our thought was to get Jonathan those days, which was what we did. We pulled Jonesy because it changed the momentum. There were three goals in a minute, and then they scored two again before the period was out. It surely didn’t change the momentum, so you might as well put him back in. It’s not that hard to figure out.

On whether there will be “extra desire” with Anaheim visiting on Saturday:
I think you’re getting into the philosophy, and I’m really just talking about tonight’s game.