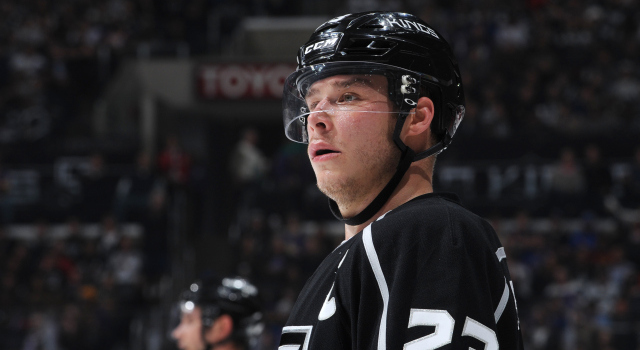 On losing Tyler Toffoli and Tanner Pearson for an extended time:
I think if you look at our team historically over the last however many years, what’s made us a good team is when guys go down we have guys that, one, come in and play well, and two, our current players elevate their game. So we have to draw on that.

On whether the team’s level of experience is comforting:
I think it’s more that we’ve been through the battles together before. Everybody talks about experience, but what makes our team really good in hard situations is we’ve been in the so-called trenches together and that goes a lot longer way than guys having experience on other teams with other guys. We’ve been together as a group for a very long time. When it gets hard, it’s easier to trust each other.

On whether Toronto has given them some tough games recently:
We’ve only played them once this year. [Reporter: Last year they came here and won.] I think every year is different. I think we found a way to battle back against them after giving up a two-goal lead. For us, we’ve got to worry about ourselves. I think when we play our game, play our style, we’re a really hard team to beat. They obviously have some elite, high end guys that we have to key in on but we have to get our game in order.

On whether limiting time and space is the key to improving the penalty kill:
I think it’s just playing within our structure. A lot of it is just work when it comes to our PK. I know we gave up a PK goal last night. If that’s the only chance we give up and it goes off of Lewie and into the net, I thought our PK did a pretty good job last night, even though we gave up one, it’s kind of a fluky goal. It’s about getting back out there and responding the right way, which we did after giving up that first one.

On whether the team got back to their game in the second period:
I think our game consists of, one, our D-zone coverage, and then once we have the puck, when we’re really good, we don’t miss passes and that allows guys like Jeff and Kopi [to use their skill]. If we can get out of our zone cleanly, we can give guys opportunities, plays on the rush, you see what happens. I had a chance in the second where I’m [on] a breakaway with speed or breaking in from the side. It’s all a result of moving the puck out of our zone cleanly. When we do that, the game really translates at the other end.

On whether the team was able to get opportunities off of the forecheck:
That’s a part of our game as well. I still think we can be better on our forecheck. I think we’ve had instances of doing it really well and instances of having a really good F1 and not having the F2 or F3 or vice versa. Again, there is always stuff you can improve on and the forecheck is, I think, one of those areas we can get better.