Pearson breaks bone in leg, Toffoli out with mono 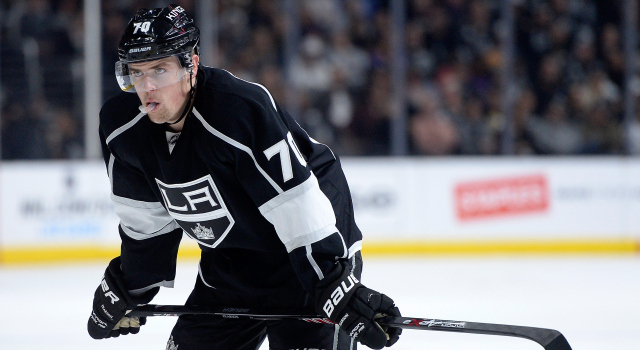 Tanner Pearson, who crashed heavily into the boards during a second period scoring opportunity in Saturday’s 5-4 shootout loss to Winnipeg, suffered a broken bone in his left leg, LA Kings Insider has learned. At this point, there is no timetable for his return.

“They told us he would not return, so I’ll give you more information as we go along,” Darryl Sutter said after the game when asked if he was able to provide any information on the nature of the injury.

A reliable source told LA Kings Insider during the second intermission that the injury was a broken ankle, information that hockey operations confirmed. A follow-up conversation with a third source said that the injury may be located more in the lower leg, and not the ankle.

Per Lisa Dillman of the LA Times, Pearson will undergo more tests on Sunday.

This is a terribly unfortunate hand dealt to Pearson, who earlier today was named as one of six rookies to take part in the skills competition at the NHL All-Star Game. The 22-year-old left wing is tied for second on the team with 12 goals and has 16 points through 42 games this season.

Compounding matters, Tyler Toffoli, Pearson’s frequent linemate, was diagnosed with mononucleosis and will be out indefinitely. The news came via the Kings’ public relations department during pre-game warm-ups.

“He had a rash after that last game,” Sutter said. “The doctors looked at it, and they did some blood work on him and it came back with mono.”

There is no timetable for Toffoli’s return. The right wing is tied for second on the team with 12 goals as part of a 41-game, 27-point campaign.

There is no immediate word of roster moves the Kings will make. When learning of Toffoli’s illness, I consulted with hockey operations to see whether center Nick Shore could be on his way to Los Angeles. At the time, there was doubt cast on the immediacy of a roster move, though I was told “Shore and Brian O’Neill have been very good.” Of course, Pearson’s injury certainly changes the circumstances of a call-up.

However, reports arose tonight that O’Neill, who leads the AHL with 43 points, suffered a hand injury. The forward issued this tweet after the Monarchs’ 6-1 win over Binghamton:

Thanks for all the support Monarchs country. Scary situation, but very thankful! #perspective

In addition to Shore, who ranks second in the AHL with 41 points, other forwards who could receive a call-up are David Van der Gulik and Jordan Weal.

More information on potential roster moves and the severity of the two ailments will be learned at the Kings’ practice on Sunday, which is scheduled to take place at 11:00 a.m. at Toyota Sports Center in El Segundo.