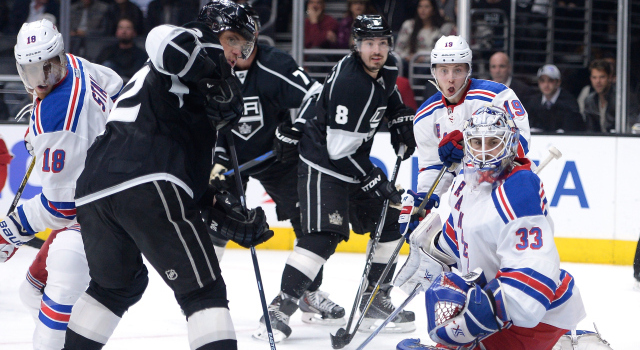 On the 4-3 loss to New York:
We had trouble keeping up with a fast team. [Reporter: Was it strictly their speed?] Well, there are two ways of neutralizing speed: be fast yourself, and then slow them down. The Carter line – we couldn’t handle it.

On the goaltending:
I think it was pretty even. Both goalies probably made some big saves. I think Jonathan made two big ones in the first.

On how to keep up with the Rangers and neutralize them when the Kings are “going good”:
Well, you can’t take penalties. You’ve got to be able to skate with them, you have to have the speed through your lineup to do it, and you have to be able to check. We had some top players tonight not in the checking mood.

On whether the loss was more disappointing given the early lead:
No, I don’t think it was really based on that. I think that we took a slow penalty that they scored on to make it two-one, and we took a penalty for them to go up four-two, and I think that in the third we had a little bit more urgency in our game and we made it close.

On how concerned he is with the defense after having given up 11 goals in two games:
It’s not concerning about where they’re scored at, but you can’t give up four goals in a game and expect to win, ever.

On the importance of playing well on home ice:
It has been for us. We have one of the best home records in the league, so we have to continue to try and do that.

On whether the Kings faced a team that was riding heavy emotion, given the circumstances:
No, I think we were expecting [it] watching them last night. They’re on a run – I said it this morning. I mean, they’re hot, and when you’re hot like that, you’re the best team. They’re hot, and they were clearly the best team. They were going to come out hard tonight. I think we were ready for that, and we had that good first part of the game, but I don’t think there’s any extra on either side.

On how the extra rest affected the Kings:
Yeah, it made us better in the third. That’s right from my seat, where I was. We were better in the third because of that. [Reporter: And maybe for the long haul, to, right?] Yeah, we’ll see. We need to get some more out of good players, that’s for sure.

On why the Kings have allowed 11 goals in the last two games:
We’ve got to continue to be better checkers right through our lineup. You don’t win in this league without checking. I’m answering the same question in a different way.

On why Jake Muzzin’s minutes were down:
He refused to check. You don’t get played for what you did last year or last week or somewhere else. It’s how you’re playing tonight.