Greene: “I think a lot of guys are mad” 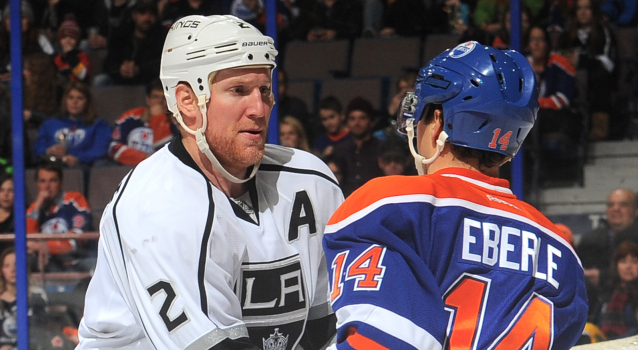 Jake Muzzin shared an interesting viewpoint after the shootout loss in Edmonton two nights ago.

It was a passionate expression shared shortly after a disappointing loss, so the emotion is understandable. Of course, this team’s “park-and-ride” approach stipulates that this team lets go of wins and losses around the time it leaves the arena, so I was wondering if the team’s recent stretch – the Kings are 7-7-4 in their last 18 games – has, in fact, made the team want to work a little bit of anger into its game. I consulted with alternate captain Matt Greene.

Matt Greene, on whether the team needs to play angrier:
During the course of the game, I think a lot of guys do. I think a lot of guys are mad. Me personally, I’m just mad at myself to get my game going, to get in order and do everything you can to stop this skid, to stop this mediocre hockey that we’ve been playing lately. I think a lot of guys have a strong desire to be doing things better and that’s why we’ve won over the years. But we’ve got to find that and we’ve got to do it. But it all starts within. It’s not getting mad at outside influences. It’s getting mad at the things you can control and the things you can change to play better.

Greene, on whether the loss to Edmonton was the impetus to play more desperate:
I think a lot of guys are frustrated. You’re coming in, you’re thinking you’re doing things well and you find yourself trailing in a game. That’s how it’s been every game lately. We think we’re doing the right thing but we’ve got to play harder, we’ve got to play better. Everybody has really got to evaluate themselves and realize they can do more. They can play better.

Greene, on trying to engineer stronger starts:
We just have to be better. We have to be better in the first. We’ve got to come out and start the game on time. That’s how we’re losing games, we’re spotting leads and we’re not scoring the goals to get them back. We just have to do it. There is no recipe for it. There is no secret answer or anything like that. It’s hard work and it’s demanding more out of yourself.