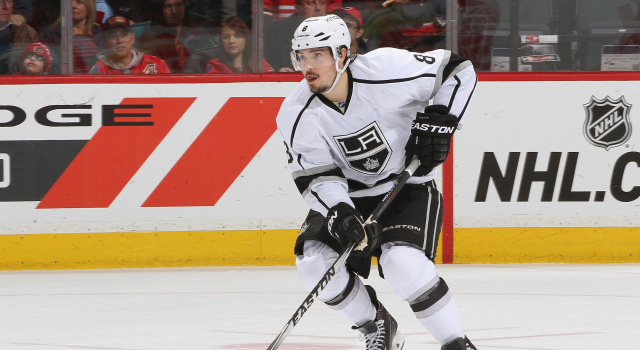 On whether the loss was a case of not being able to beat the goaltender:
Yeah, I guess a little bit of that. The goalie played well. But the thing was we really didn’t start pushing it until the latter half of the second, and the third period we dominated. I think a big reason why we lost was we had two quick lapses in the first period. They scored on them and we had to battle back from there on out. We need to start earlier. We need to start with a lead rather than be behind right away.

On removing lapses from the team’s game:
I think everyone just needs to be ready before the game. It comes down to, individually, just being prepared. We know exactly what to expect from every single team we play against. It just comes down to wanting it more and wanting to perform to the best of your ability. When we even have one or two guys slip, we’re not at our best as a team. We need to be at our best as a team in order to win games. Every single guy needs to be at their best.

On whether slow starts are a bigger issue on the road:
It shouldn’t be. I think maybe statistically it’s showed that this season and we need to fix that. There is no excuse. Maybe we’re flying or we have to adjust to different time zones, stuff like that but every other team is doing that and they’re taking it to us when they come to Staples. We have no excuse. We have to play better in the first period. That’s it.

On how the team can prevent shots from being blocked:
Daryl touched on that in the second intermission. We only had one shot, at that point, from our defensemen that got to the net rather than blocked. Something that we’ve been doing a really good job at is getting shots through from our defensemen. So we, as D-men, really tried to work at that and I thought we did better in the third period. They’re good at blocking shots. But the bottom line is if they’re going to block it, we have to make it hurt. Either get it on net or make it hurt.

On the look he had at the end of the game:
It was in between [the goalie’s] legs so I could see it and I tried to get in between his legs and jam it in. By that time, he kind of closed them so I couldn’t get my stick in there without spearing his legs a bunch of times. I saw it and if I had reacted one second quicker I think it was a goal. It’s frustrating.