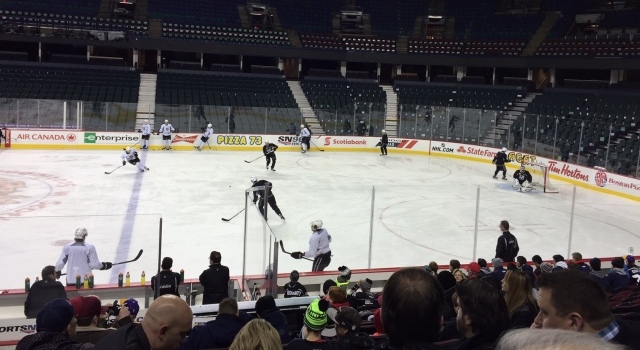 Good afternoon from Calgary, where the Kings have returned to the team hotel after a morning skate at the Scotiabank Saddledome.

There was no hand-tipping towards tonight’s lineup. All skaters left the ice at the same time without remaining on for extra work, so it’s difficult to accurately gauge tonight’s scratches. Jeff Carter and Marian Gaborik did not participate in the skate; I’ve been told by hockey operations that both were a touch under the weather and were given the morning off. Because it wasn’t a full group, line rushes were meaningless. Given that the Kings played some of their best 60 minutes of the season during Saturday’s 3-1 win over San Jose, it’s a bit of a reach to project any changes.

Still, Jeff Schultz could be an option for Los Angeles tonight. The 6-foot-6 defenseman who averaged 18:51 of playoff ice time over seven games versus Anaheim and Chicago last spring is yet to make his regular season Kings debut. Could it come tonight in his hometown and in the rink in which he played junior hockey? “We’ll find out and kind of wait and see,” Schultz said.

“I’ll just go today as a normal game day routine and just come to the rink as if I’m playing and if not, that’s alright.”

Schultz was selected 27th overall out of WHL-Calgary and has played two regular season NHL games at the Saddledome, both with Washington.

“It’s been three years since I’ve been here,” he said. “I played a lot of games here back in juniors. I have a lot of good memories. It’s kind of one of my favorite rinks to play in.”

“I’m sure there are a lot of people who came to the game tonight and it’d be nice to see me back out there again. We’ll find out and kind of wait and see.”

Perhaps working in favor of Schultz’s return to the lineup? Fellow left-shooting defenseman Brayden McNabb, who absorbed a wider work load during Alec Martinez’s injury and has done a good job of logging minutes and gaining experience as the team has weathered injuries on the back end and Slava Voynov’s suspension, has experienced a decline in his usage this month. Even though McNabb totaled 12:42 and 12:43 of ice time over the last two games – the sixth and seventh fewest minutes he has logged in a game this season – it still seems like a bit of a stretch to project Schultz to enter in for McNabb.

Jeff Schultz, on celebrating Christmas with his family in Manchester:
It rained all three days I was there and it didn’t really feel like Christmas. But it was nice just to go back and get away from the rink and spend some time with my wife. It was good. Some much needed days of rest. It feels good to be back at it. [Reporter: You’ve been on a plane a lot.] I have, yeah. A couple days, a day coming up and a couple days in LA, then going back down and a couple days in Manchester, then back up. So it’s kind of get my feet back under me and have a couple good days of practice and just kind of get back at it.

Schultz, on why he enjoys playing in Calgary:
I think it’s just kind of the hometown thing and kind of feeling comfortable out there. The ice is always good here. You always hear about Calgary having good ice. I kind of like that.

Schultz, on how he has handled his role in the organization this season:
You know what, I just kind of didn’t think about it much. It was earlier in the year where they said they couldn’t call anybody up because of cap room. That’s kind of the management thing. You kind of can’t look too far into it because you have no control. You can only control what you do on the ice. Then finally getting the call and being able to come up, it’s always great coming up and being part of the team again.

Schultz, on what rink he grew up skating on:
I grew up on Lake Bonavista. There is a man-made lake there. So my dad had me push a chair around the ice there and that’s kind of where I learned to skate and play hockey. [Reporter: How old were you?] I want to say four or five.

From Calgary’s perspective, there aren’t likely to be any lineup changes from when they visited Los Angeles one week ago. Mikael Backlund practiced with the full team for the first time since undergoing November abdominal surgery but was in a non-contact jersey and won’t play tonight. Jonas Hiller will start in goal.