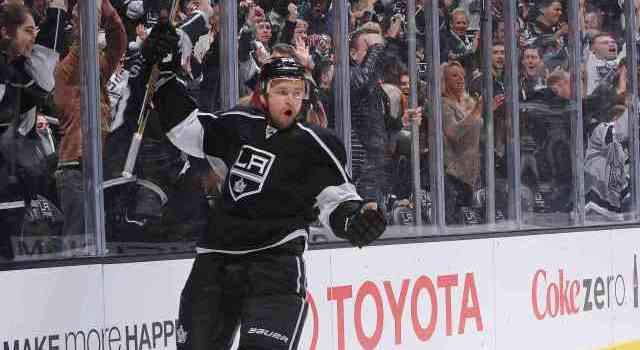 Trevor Lewis and linemates Tyler Toffoli and Tanner Pearson have attached some production to their recent standout play. Because this is hockey and Hockey Lines Have To Have Names, there are already a few ideas floating around through cyberspace.

“The Triple-T Line or something,” Lewis said of the alliterative first name line.

There have been several encouraging developments with this line since it was first deployed heavily in the 4-2 win over Arizona two Saturdays ago. Toffoli issued a third period assist to Lewis to help cement the victory that afternoon, and in yesterday’s 3-1 win over San Jose, Lewis earned an assist on Toffoli’s first period equalizer. The energy player with a reputation for his penalty killing and 200-foot savvy now has points in three straight games.

“It’s a lot of fun playing with them,” Lewis said. “They have a lot of energy and they’re great players and love to make plays. When all three of us have our feet moving like that, good things happen.”

Lewis, who has already tied a career high with six goals, would be on pace for 27 points if his current production was spread over 82 games (which it won’t be after he missed nine games earlier this season).

A 27-point pace represents a significant increase from his career output, which peaked when he recorded 14 points in the lockout-shortened 2012-13 season. There are reasons behind his uptick in production: He’s playing with more skilled linemates, he’s starting a greater frequency of shifts in the attacking zone, his shooting percentage has increased, he has a well-respected approach – more on that in a moment – and his possession numbers have shown a night-and-day improvement from his career numbers.

In 2012-13, the season in which he most consistently drove play towards the attacking net, his Corsi-for was still 2.4% below the team’s rate when he was not on the ice. This year, Lewis’ Corsi-for is 58.9%, a 5.8% increase from five-on-five situations in which he hasn’t been deployed. It’s a remarkable turnaround.

“I think maybe the confidence level has a lot to do with it. [I’m] holding onto the puck a little bit longer rather than just dumping and chasing the whole time,” Lewis said. “And I’ve been playing with good guys this year and everyone seems to get the puck out quick and get it in and hold onto it longer. It’s really helped a lot.”

For the coaching staff, it’s not exactly a surprise that a player who has made a concerted effort to improve his own play has found results in doing so.

Trevor Lewis, on whether he has made an effort to find more offense:
Definitely. The past couple of years I’ve been trying to make a conscious effort of chipping in a little bit more, but not losing the defensive part of my game. This summer, I worked really hard on just shooting more pucks and stick handling and things like that. So far, I think it has paid off.

Lewis, on whether he has a ‘shoot first’ mentality in the offensive zone:
Yeah, I think so. I’m always looking to get the puck to the net. You never know what’s going to happen, rebounds, it kind of causes havoc. It’s tough when you’re coming in the D-zone and someone shoots it and you don’t know where the rebound is going. There are second and third opportunities there. I’ve been trying to put a little more focus on that.

Lewis, on whether the team is heading in a direction he likes:
Yeah, I think so. I think last night was good for us. We played a really solid team and played a really solid game I think from everyone. We got a real solid effort and a real consistent 60 minutes there. We just have to keep it going. We’ve got some more division games coming up and these are big points for us.

Lewis, on building trust with Tanner Pearson and Tyler Toffoli:
They’re really smart players. They’re so fun to play with because they have lots of energy and like having fun out there. But also, they’re getting really good at the detail part of the game, making those plays on the wall and getting in on the forecheck and stuff like that.

Lewis, on whether Toffoli has been down for being in a recent scoring slump:
I don’t think he does that at all. He makes those good plays on the walls on the breakouts that really help us. And he’s still been shooting the puck and getting lots of chances. Sometimes they’re not going to go in for you, but you just have to keep shooting. I think he’s been doing that and got one last night, so hopefully he can keep that going.