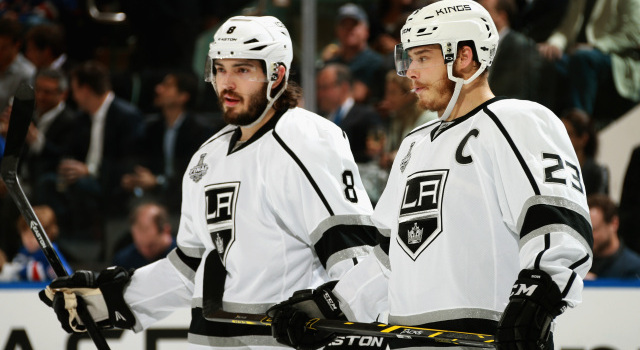 The Christmas break followed a home loss to Dallas on December 23 that served as part of a 5-14-2 stretch plagued by early winter doldrums – not that Dustin Brown recalled every last detail.

“It all blends together for players,” he said. “I don’t even remember sections from the beginning of this year.”

Perhaps he’s better recalling the team’s play that followed the Olympic Break, a February rift in the schedule that separated Win 1 from Wins 2-8 of a season-long eight-game winning streak. Players later in the season referenced the Olympic break as having provided the opportunity to hit the “reset” button and refresh after a challenging six-week stretch of play in which the team wasn’t regularly finding the results it was looking for.

“I think part of it’s a reset, [and] part of it’s a break from a long season,” Brown said. “We have to take advantage of it when you have a few days. Hopefully we can use it to our advantage.”

It seemed to be an outlook shared by defenseman Drew Doughty.

“Any time you get a break from even coming to the hockey rink, it’s huge. We come here every day, basically,” Doughty said. “We get four days off a month or whatever it is. It takes a toll on you. You’re hearing the same things repetitively and sometimes it’s stressful because you have to do your job and maybe you’re not doing it to the best of your ability. So anytime you get a break it’s good. I think especially for our team, it’s going to benefit us.”

Drew Doughty, on whether he recalls last year’s post-Christmas losing streak:
I remember we lost to Dallas, but I don’t remember what happened after the break at all. Obviously from what you said, we’re not looking to do that again. We want to come out of the break on a roll and go on a hot streak up to the All-Star break and that’s what we’re looking to do.

Doughty, on the team’s priority coming out of the break:
We want to get back into a more secure playoff spot. I don’t even know if we’re in one right now. [Reporter: I think you’re in the wildcard.] Yeah, eight. So we want to get into the top two in our division. It’s not going to happen overnight. We’ve got to win a lot of games in a row. So that’s what we’re looking to do, just get as many wins as we can. We have these five-game segments we play and we want to win everyone if we can, especially these big games like tonight against San Jose. We need to get these wins because they’re bigger than a normal two-point game.

Doughty, on whether he is tired of answering questions about consistency:
I think guys are starting to get in the groove on our team and that’s going to help our team become more consistent. I think if every single player on our team looks at themselves in the mirror and works on their own consistency, then as a team, as a whole, we’re going to be more consistent together. I think that’s all it is, every individual just needs to step up their game a little bit and play the right way as a team and we’ll win a lot more games.

Dustin Brown, on what the team’s priorities are coming out of the break:
I think, if anything, it’s going to be our consistency and our play. I know that’s been said a lot, but we’ve had spurts of really good hockey and lose games because we don’t play well for five or 10 minutes. That’s how close the league is. You look at our game, there are a lot of peaks and valleys.

Brown, on why the team has struggled:
It’s a catch-22. If we knew why it was happening, it wouldn’t be happening. A lot of it is probably just preparation on an individual level.

Brown, on whether he pays more attention to the standings after the break:
I mean, we pay attention to the standings all year. It’s about keeping pace with the herd and we’re right there. We just need to find ways to win games. Like I said, it’s about our consistency, really. I think if we’re more consistent in our game, then the standings we won’t really have to worry about too much. [Reporter: Does that make these divisional games more-] I mean, you look at the last game we played. Everyone is like ‘Oh, you got a point out of it.’ Well, we gave two points to the other team. It’s a two-point game, really, or a four-point game and they got two, or they got two and we got one.